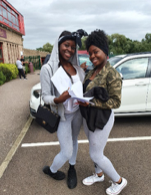 AS the 2020 summer exam season was cancelled, this year’s Year 11 cohort have been awarded grades by the exam boards, based on information supplied by the schools. The previous years, to generate each individual pupil’s final grades.

None of the usual benchmark data or headline figures which lend themselves to comparisons between this year and other years, or between schools, have any validity this year.  Schools in this area have therefore come to an agreement that it would serve no purpose to release such figures into the public domain.

Sitting exams would have been stressful enough for these young people, but losing the chance to prove what they can achieve has been even more so. Thankfully, pupils at St Mark’s are now able to celebrate, as their GCSE grades will allow them to pursue the sixth form courses or other education routes of their choice.

There were many examples of outstanding individual performances with most pupils not only achieving their target grades but a number exceeding them.

For example, the following pupils all achieved at least 9 or 10 grades 9-5 (numbers next to their name indicate number of 9-5 passes and the numbers in brackets indicate the number of 9-7 or equivalent grade): 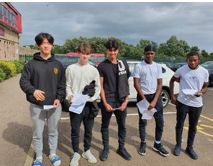 St Mark’s congratulate all our pupils and look forward to seeing them in their Sixth Form in September.