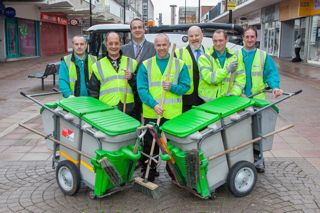 The old style street cleaners accompany the wave of mechanical street sweepers getting into every nook and cranny and leaving no stone unturned in an effort to keep Harlow’s streets clean and free from litter.

The back to basics beat barrows have double bins and are equipped with brushes, a shovel, bags and wetsuits to keep the operator dry in wet weather. They are designed for easy manoeuvrability, especially in areas that are congested or inaccessible to mechanical street sweepers.

The barrows have been in use for the last six months in the litter hotspot areas of Staple Tye, Katherine and Sumners, the town centre, Hare Street, Little Parndon and Toddbrook. The Estate Street Cleansing teams operate in waves and the introduction of the five barrows has helped reduce the amount of time it takes a mechanical team to complete a wave. With this reduced time the team can now complete more waves and cover Harlow in a shorter space of time, helping to maintain street cleaning standards for the town.

Kier Harlow operations director, John Phillips said, “We started the wave system around two years ago but felt we could improve even further by making small changes; this has already proved effective at tackling litter and in keeping our customers satisfied. The removal of litter is only one element of the work we do to keep the environment clean and tidy and we’ll continue to work hard on improving this aspect of our work.”

Councillor Phil Waite, Cabinet Portfolio Holder for Environment said, “Keeping the streets clean is important to residents and businesses. Working with Kier Harlow we’re always looking at ways we can improve the way we clean the streets. Unfortunately people drop litter and in some areas this happens on a daily basis. Residents and businesses don’t want to see litter lying about on the streets for weeks. This new way of working means Kier Harlow can get round the town more quickly to ensure Harlow looks its best.

“If people just put their litter in a bin we could save thousands of pounds a year – and that money could be used to fund vital services for the whole community. Every year, the price of picking up litter that hasn’t made it to a bin costs Harlow Council close to £2million a year.”

Kier Harlow provides a variety of duties on behalf of the council including: housing repairs for the council’s 10,000+ properties; municipal building repairs, providing a maintenance service for commercial and other premises owned or operated by the council; street scene and grounds maintenance, looking after Harlow’s streets and green spaces; pest control and vehicle maintenance.