MP thanks those who worked over Christmas

Mr Halfon said: “Every year on Christmas Day I visit a number of wards in Princess Alexandra Hospital with Harlow Hospital Radio.

“Although my main purpose is to wish a very happy Christmas to patients it is also to thank all those who are working in the hospital on Christmas Day.”

He added: “I am always struck by the patience, dedication and commitment of all the NHS staff at this time, and everyone is cheery even though it is December 25.”

“While we were doing the rounds, Glen from Harlow Hospital Radio was in the studio taking requests from patients.

“I was allowed one – Dexy’s Midnight Runners ‘Come on Eileen’ 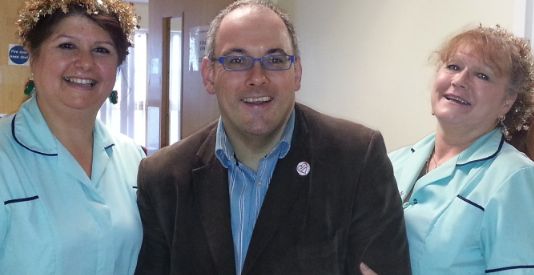 He later visited the volunteers from The Chocolate Run to say season’s greetings to some of the homeless the charity looks after at this time of year.

“I had been to the opening earlier in the week and it was good to see Christmas dinners being cooked and a festive atmosphere.”