The Circus of Horrors to descend on the Playhouse 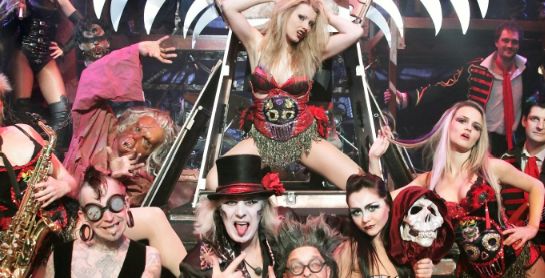 , The Circus of Horrors presents what is undoubtedly its greatest show to date London after Midnight.

The show that stormed into the finals of BRITIANS GOT TALENT is back with an awe-inspiring rock n rollercoaster of a show that flies like a bat out of hell to celebrate an astounding 18 years of shock n’ roll.

Ever since its conception at the 1995 Glastonbury Festival, the show has toured the world achieving cult status and dragging circus screaming and shouting into the 21st century and beyond.

The new sensation is inspired by the legendary and sinister lost movie ‘London after Midnight’ and is packed with new shocks will take you on a whirlwind journey though a plague ridden London in 1665 and culminating during the Great Fire of London in 1666.

The story will twist and turn as five murders are committed in various London landmarks.Each one becoming more and more horrific and all intermingled with some of the greatest, most daring, bizarre and beautiful circus acts on earth.

From sword swallowers to dare devil balancing acts, from hair hangers to demon dwarfs, from a pickled person to astounding aerial acts, all performed with a forked tongue firmly in each cheek, by an almighty cast and the devil driven rock and roll of Dr Haze & The Interceptors from Hell.