Review: Helen of Troy in a modern setting 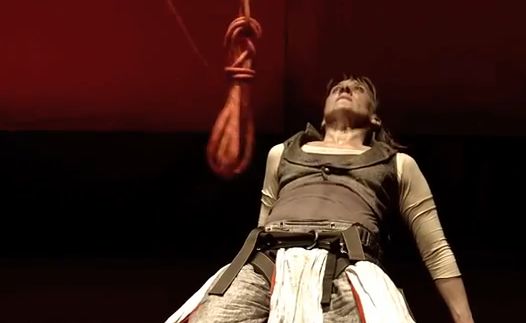 A world premiere from the Dionysis theatre company, Helen tells the story of the face that launched a thousands ships with a dystopian modern twist. Twenty years on, the Troy empire, along with Helens’ face is crumbling.

Following the sudden assassination of her husband, Helen is desperate to seek asylum and evade capture for unspecified war crimes, all the while obsessively trying to contact her plastic surgeon. This is all dictated as emails are tapped out into a laptop by her mute castrated guard.

With the action shared between just two actors, co-writer Tamsin Shasa’s Helen, and her guard who seems at points more her captor, in his combat fatigues, it is a deliberately physical performance, told more in movement than in the one sided dialogue. This leaves the audience lacking any real context, despite continued references to Troy, and her face.

It feels throughout like the original story has been obscured by its modern interpretation, and at just under an hour, the piece never has time to feel like a story more than an admittedly striking performance piece.

A fascinating piece of contemporary physical theatre though it is, I can’t help feel it will leave those interested in the original story disappointed.