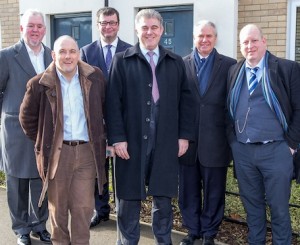 THE Minister of State for Housing and Planning, Brandon Lewis, was in Harlow today (15 February 2016) to meet community leaders to talk about the town’s potential for growth in the future.

With the Government investing £420m in new world class Public Health England labs in Harlow, the progressive development of Harlow Enterprise Zone and the strategic location of the town at the centre of the London Stansted Cambridge Corridor, the potential for Harlow’s economic and housing growth as a “Garden Town” is being pushed higher up the agenda.

The Minister attended a meeting at the Civic Centre with the Leader of Harlow Council, Councillor Jon Clempner, Leader of the Conservative Group, Andrew Johnson and the MP for Harlow, the Rt Hon Robert Halfon to discuss how the potential of Harlow could be realised in practice. The meeting concluded with a visit to the housing development at Tanyard Place which is an example of the Council, Homes & Communities Agency and Home Group working together to provide new homes.

The need for investment in infrastructure was discussed. Whilst it was recognised that current road improvement projects in the town were being undertaken, the Council highlighted its ambition for further investment. This included bringing Crossrail 2 to Harlow, 4-tracking the West Anglia main railway line, the provision of a new M11 Junction 7a and a northern bypass.

Housing Minister Brandon Lewis said: “I know that Harlow is a town on the rise with a real appetite to grow. As the government that has set out the boldest ambition for housing since the 1970s, we’re well placed to support that ambition. That’s why it’s great to be here today to meet with local leaders and discuss their vision for the future. I’m confident that by working together we can continue to drive Harlow forward and build the homes that local hard-working families want and need.”

Councillor Jon Clempner, Leader of Harlow Council, said: “It was important to meet the Minster for Housing and Planning today and have the opportunity to discuss both Harlow’s potential for growth and the role Harlow can play in this part of the country. We will continue to make the case with Government to get the investment that Harlow needs and I thank the Minister for taking the time to visit Harlow and listen to what we had to say. We know with the Public Health England National Science Hub coming to Harlow and the success of the Enterprise Zone, Harlow is on the up. This is pushing the issue of growth right up the agenda but we need to address the infrastructure issues first, which is a concern for residents and businesses alike. We need to plan for growth, rather than growth just happening without the right infrastructure in place, like transport improvements and new health facilities. The Council looks forward to working with residents, businesses, other Councils, other communities, developers and the Government to make Harlow the place of choice to live, work, invest in and visit.”

Councillor Andrew Johnson, Leader of the Conservative Group on Harlow Council, said: “It was great to meet with the Minister today and to talk to him face-to-face about Harlow’s potential for growth and the opportunities which exist for Harlow residents and businesses. We are seeing investment from the Government in our town with the Public Health England labs coming to Harlow and the Enterprise Zone, but it is important that we all work together to ensure Harlow continues to get the investment it needs. Harlow is ideally placed to be the hub of transport infrastructure improvements for the region and that’s why Harlow Council is pushing for Harlow to be the location for the Crossrail 2 terminal.”
‎
Harlow’s MP, Robert Halfon, said: “I have been working hard to make sure the Government is aware of the housing issues in Harlow and this is why the Minister for Housing and Planning, Brandon Lewis MP, has come to visit Harlow today. I’d like to thank Harlow Council for all the work they are doing to support housing growth in our town. I know that housing is one of the biggest issues for residents and for the future of Harlow. This housing summit is an important step forward.”

Mark Henderson, Home Group chief executive, said: “We were delighted to host Mr Lewis, Mr Halfon and Cllr Jon Clempner, Leader of Harlow Council, today at Tanyard Place to illustrate the successful partnership working in Harlow. We fully support the view that the provision of high quality housing of mixed tenure is vital along with other infrastructure measures to support economic growth. We also explained how working with Harlow Council and Countryside UK we’re regenerating communities in the Staple Tye area of the town at The Briars, Aylets Fields and Copshall Close. This regeneration will provide modern mixed tenure homes and help support people whose ambition is to own their home. The £67m regeneration project will see 205 existing homes demolished replaced with 342 homes for rent, shared ownership and outright sale.”