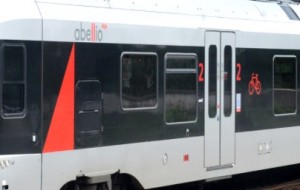 TODAY Robert Halfon MP spoke to local commuters at Harlow Train Station to hear about their thoughts and views on the current train services currently offered by Abellio Greater Anglia.

Which?, a consumer group, has launched a report in which Abellio’s overall customer satisfaction score is 47%, the third lowest of the 22 train franchises surveyed across Great Britain.

‘I am deeply concerned by the report as Abellio’s overall customer satisfaction score.

I have been working hard to speak with Network Rail and Abellio to improve services and there is no reason why we should be this low down in the ranks.

Many commuters have contacted me about their unhappiness with train services to and from Harlow and following a consultation on what future services should look like, the Government has set out the minimum requirements for services under the new franchise.

This means that financial penalty will be imposed if targets are not met and new measure such as improving the quality of trains running on the network, bring in free Wi-Fi for all passengers and meet challenging targets to reduce crowding on the busiest services are being implemented.

Until now, it has been up to Abellio to set its own targets for customer service and to report back to Government.

I am pleased that the Government has decided to deal with this problem and I will continue to represent views of Harlow residents and make sure they receive a response.

I congratulate Which? for all the wonderful work they do to stand up for local commuters and I was pleased to be with them earlier this morning.’

Abellio’s current contract runs out in October 2016 and a decision as to which franchise will continue this service will be announced later this summer.