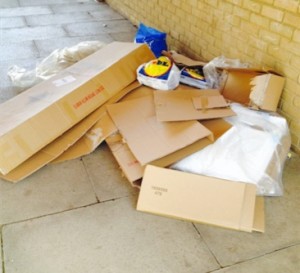 Kestra Cross, of Longbanks, was summonsed for non-payment of a fixed penalty notice issued by Officers who witnessed her throw a cigarette on the floor outside Poundland in Staple Tye and walk away on 6 October 2015. Ms. Cross attended court and admitted to committing the offence, and was fined £40 and ordered to pay court costs of £180 as well as a £20 victim surcharge.

Following the prosecutions, Councillor Mark Wilkinson, Portfolio Holder for Environment, said: “Littering and fly-tipping are two of the top concerns of our residents and it is the Council’s duty as community leaders to help maintain a safe, healthy environment for our residents and those visiting town.

“Dropping litter and cigarette butts and dumping rubbish is unacceptable, unsightly and potentially hazardous to health, and once again the Council has acted to take the perpetrators to task, using the conclusive evidence gathered which is necessary to issue a fixed penalty notice.

“Every piece of litter that doesn’t make it into a bin or rubbish that is dumped around the town costs Harlow Council money to collect and this can soon mount up. Every year Harlow Council spends close to £2m cleaning up Harlow’s streets and housing estates; this is money that could be better used to protect services.

“Thank you and well done to the Council’s Community Safety and Legal Teams in bringing these prosecutions to a successful conclusion.”

If you spot dumped rubbish or litter around the town you can report it to us at www.harlow.gov.uk/report – all reports are investigated and, if conclusive evidence of those responsible can be found, the Council will issue fixed penalty notices.