A SCHOOL which teaches students how to rap is now introducing DJing into its modern curriculum. 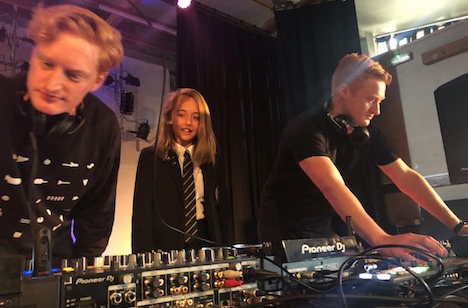 Burnt Mill Academy, in Harlow, prides itself on offering its students – often from deprived backgrounds – opportunities to learn to play musical instruments and to perform to live audiences.

With music lessons focusing predominantly on traditional instruments, the school was keen to find new ways of reaching those young people who might only have an interest in modern music genres.

Having introduced rap lessons earlier this year, the school is now working with Future DJs to entice more students to take up music.

The school has seen the number of students taking music as an option at GCSE double in the last year.

Cristin Casey, director of performing arts, said: “This is about giving more opportunities for students to access creative subjects and GCSEs through different avenues.

“Music making is not just about playing a traditional instrument like the clarinet anymore, it is engaging in technology and using that as an avenue to perform.

“Our numbers have grown because we have built music technology into the curriculum and, using rap and DJing, brought our music offer into the 21st century.”
Year 7 and 8 took part in a taster session with Future DJs and got the opportunity to perform on stage in front of their peers.

As a result, 250 students – half of Key Stage 3 – have applied for further information to take part in further DJ sessions using the school’s Ableton Push music-making equipment and others by companies such as Pioneer.

Mrs Casey, who has been building the school’s resources for this kind of lesson for some time, said: “We have partnered up with Ableton and VIP Studios through Essex Music Education Hub led by Essex County Council, which makes music-making equipment available to schools. Using the Push, students can compose, create and perform their own music which previously would be a barrier to new music-making in the classroom.”