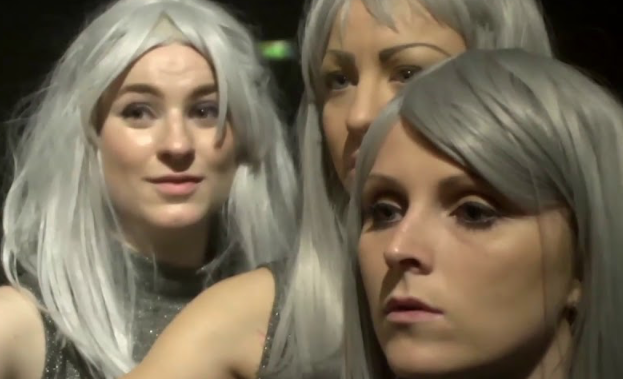 UP in Theatre 2, you are always guaranteed what can only be described as ‘challenging theatre”. Smack That certainly follows in that tradition.

This is immersive theatre in that you are in seating within the seating. You are going to be involved, which in many ways is a metaphor for domestic violence, the theme of this production. With two women a week dying due to domestic violence; you are involved.

We are at Bev’s party. Six actresses play Bev. There is no discernible narrative arc but you do feel that you are following a story from being the victim of a heinous crime to some form of hope.

Early on, there is a party game which involved confessions or preferences. They are fun early on; “Have you ever spilt red wine on a carpet?” but they soon take a darker side and it is a testament to some of the audience members that they do stand up when asked very very candid questions such as ‘Have you ever had a knife held to your throat?”

As opposed to getting you in the party spirit, you are now immersed in Bev’s world and whether it is expressed through movement and dance or words, it is still an intense, thought provoking performance that will live long in the memory. If you thought it was uncomfortable to watch then it did its job.

The production was well paced as it used all modes of expression to convey its point. Audience participation isn’t everybody’s thing, even this grey haired old journalist who despite being a veteran of the Edinburgh Festival prefers to take a back seat but on this occasion, this was important. You are involved and some of us via a pass the parcel game got to read out some of the horrendous statistics re domestic violence.

Writer and director, Rhiannon Faith, has produced a stunning piece of theatre that somehow interweaves the colour and vivacity of an Essex party on a Friday night with the dark dark world of criminal domestic violence.

This reporter finished this review, got into his car to drive to his Saturday parkrun and on the way passes the place where, a few years ago, a nine-month pregnant woman, Estyna Blunnie was murdered by her estranged partner. As stated, you are involved, whether you like it or not.

This is type of brave, thought-provoking theatre that Harlow Playhouse is supporting.

Finally, the music from the main theatre seemed to be unusually loud. We got the feeling that it might have been a rogue speaker in a dressing room. We could see director Rhiannon getting somewhat agitated but we have to say that you could have gone away thinking it was part of the show as it was a Dolly Parton tribute act. So hearing a song about adultery and low self esteem (Joleene) and misogyny in the workplace (9-5) was sort of fitting.