Children took a trip to space to celebrate Science Week.

PUPILS at Freshwaters Primary Academy, in Harlow, got the opportunity to step inside a planetarium which spent the day at their school.

Astro-physicist Mike Culley, of Science Horizons, talked pupils from all year groups through planets, stars, constellations, where stars come from and how far away they are. 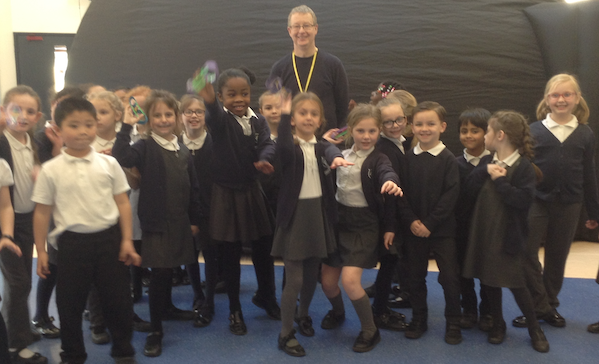 He said: “The planetarium is very exciting for children and they have asked lots of questions. It’s like you are outside looking at the stars.

“I asked them what they could see in the stars and they have been coming up with their own constellations.”

Throughout the week – which had a theme of journeys – pupils made rockets, looked at wildlife and their habitats and studied slippery slopes and oils.

Year 5 Mason Horswell said: “We have been learning about the three forces that the rocket uses; thrust, gravity and drag. We used a photo film container to make the rocket and used paper to make cones and rudders. Gases were created to put pressure on the container. When there is so much pressure in the container, it blows the bottom off and shoots it into the air.

“I enjoyed creating it.”

Jacinta Addison, science leader and Year 2 teacher, said: “Each day has had a science focus, however we have still been using maths and English skills along the way, including using measurements to make rockets.

“The week is giving them that love of science and getting them questioning things around them. I hope the week has made them realise science is all around them. Even if just one pupil goes into the planetarium and is inspired and excited to read and learn about science, that will be great.

“The visit from Mike also opened their eyes to careers within science. How often do you get to talk to an astro-physicist about the stars!”