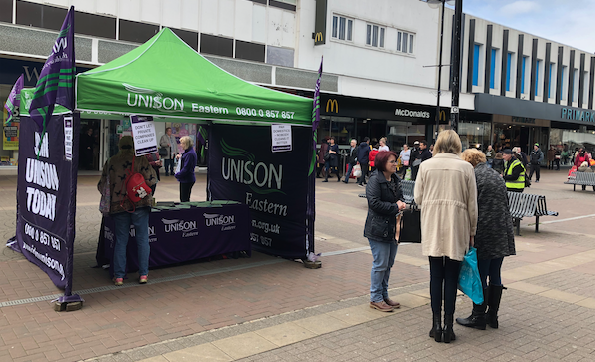 CLEANERS at Princess Alexandra Hospital in Harlow are voting on strike action over bosses’ plans to privatise domestic services and kick them out of the NHS, UNISON says today (Thursday).

The domestics warn that patients will suffer if their jobs are transferred out of the NHS as a new private company would cut corners to make their profit.

Researchers from Oxford and London universities have shown that there are higher rates of MRSA in hospitals with outsourced cleaning services.

Outsourcing would also create a two-tier workforce, with new hires brought in on rock-bottom terms and conditions, UNISON warns, while existing staff would be unlikely to benefit from future pay rises negotiated nationally with the NHS.

The hospital is currently market testing the domestic services and is expected to formally put the contract out to tender in June.

Harlow’s Conservative MP Robert Halfon has written to hospital bosses to express concerns over the effect on hospital infection rates, urging them to scrap the outsourcing plans, and other local politicians have also backed the domestics’ fight.

But UNISON says PAH bosses have refused to abandon the dangerous plans and workers feel they have no choice left but to ballot on strikes.

UNISON regional organiser Caroline Hennessy said: “PAH bosses have plastered notices around the hospital boasting of having some of the lowest infection rates in the county but they seem happy to fritter away this achievement to save a bit of cash.

“They know full well they’ll only save that cash by squeezing it out of the staff who give their all to keep the hospital clean and safe for their patients.

“It’s staggering that they can show such scant regard for patients and staff by obstinately pressing on with their damaging plans.

“Thankfully, the domestic staff are determined to defend their service by keeping it in the NHS.

“None of them want to walk off the job but bosses don’t seem to be listening to their concerns.

“Our door remains open and we’ll be happy to work with the hospital to withdraw from market testing and protect patients.”