Schoolchildren inspired by teacher who lost eyesight due to brain tumour

CHILDREN at Roydon Primary Academy were inspired to face challenges head-on by a former teacher who lost his sight to a brain tumour.

James Shone had been a teacher for 16 years when, in 2012, he was preparing to take on his first headship. 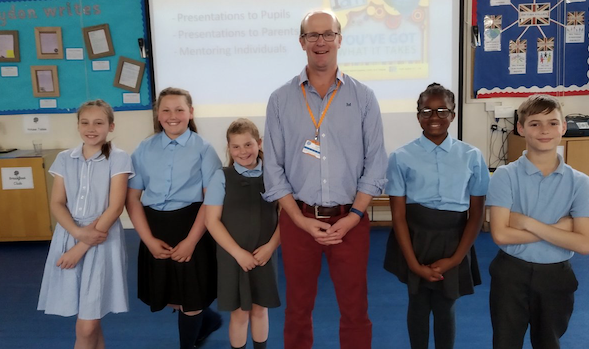 During a routine eye check as part of his medical assessment, it was discovered he had a large brain tumour.

After 27 hours of brain surgery and 80 days in hospital unable to eat, drink or talk, the father-of-four was left with no sight in one eye and only ten per cent vision in the other.

He told pupils at Roydon Primary Academy: “In 2012, I had it all; everything was as good as it could be. In 2013, I found myself with no job, no house and no sight.

“We have good bits and challenging bits of life. That is life. When the bad bits come, do they break us or make us?”

The motivational speaker – behind charity I Can & I Am with a mission to inspire confidence – said three rules to follow in hard times should be to look up, look forward and think about other people.

He said: “Keep looking forward because that is where the hopes and possibilities and opportunities are. They are in front of us; do not look back. The past we can learn from; it is a great teacher, but it is not a great master. Just think ‘can I learn from it’ and keep moving forward.

“Sometimes you might wake in a right grump. Do things for other people; that’s a brilliant thing and is where you find your purpose in life.

“The alternative option is to look down, look back and look in.”

The guest – who still has 50 per cent of his brain tumour – told pupils how he left hospital unable to walk, but was able to row the whole length of the River Thames two years ago with a positive mindset.

He said how important it was for the children to be confident that it was their choice whether to give up or get up: “One of the most valuable things you can do is to be thankful for what you do have and what you can do.”

Headteacher Michael Clark said: “James delivered one of the most inspirational speeches I have ever seen in a primary school. The children were hanging on his every word. I loved his positive attitude towards life, despite all he has been through.

“We work with the children every day on having a ‘can do’ attitude and James really put some context to this.

“We are very thankful for this visit and will be holding a charity day for his charity, I Can & I Am.”