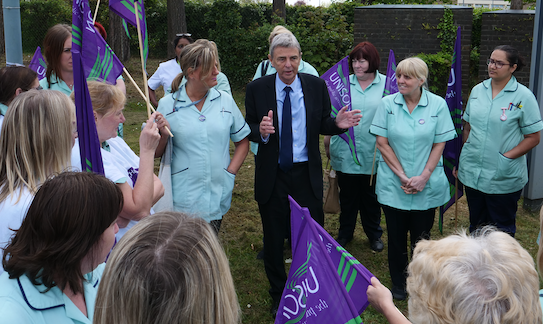 CLEANERS at the Princess Alexandra Hospital in Harlow have overwhelmingly voted to strike against plans to privatise cleaning services, UNISON says today (Friday).

They warn that if their services are allowed to be transferred into the private sector it would spell ‘disaster’ for their patients, as hospitals with outsourced cleaning have higher rates of infection than those where the service is in-house.

Princess Alexandra Hospital currently has some of the lowest rates of infection in the country, including instances of MRSA.

The staff also warn that their pay and conditions will fall below their NHS colleagues if their services are outsourced, as a private company would not be part of any future NHS pay awards.

New starters could also face substantially worse employment terms, with a private contractor facing no obligation to pay any more than the legal minimum.

Workers will discuss their next steps, including any possible strike dates, in the coming weeks. UNISON has urged the Princess Alexandra Hospital to abandon its privatisation plans to avoid industrial action.

UNISON general secretary Dave Prentis said: “All too often the reality of outsourcing is lower pay, a longer working day and reduced job security after a private firm takes over. Service users rarely see any benefit, it’s company bosses and shareholders who are the big winners.

“Keeping sick people safe from infection is life-saving work and the cleaners at Princess Alexandra Hospital are passionate about their jobs – which is why it’s so vital that standards are maintained.
“Strike action is always a last resort and we are hopeful it can still be avoided. But for that to happen, the hospital must call a halt to its damaging privatisation plans and work with us to find a better way forward.”

Claire Evans, a Princess Alexandra Hospital domestic, said: “This vote is a clear message to our bosses that we don’t want to work for an outside contractor – we are proud to work for the NHS and serve our communities.

“We don’t just clean the wards, we bring patients their teas, we make sure they get their dinners, we chat to them. We make sure they feel as safe and comfortable as possible while they’re in the hospital because we care about them.

“Taking strike action is not an easy decision for any of us but we need to stand up for our jobs and our patients.”