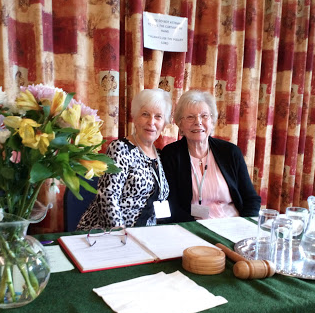 Report by the Harlow Women’s Institute

THE May meeting is the occasion of our AGM when we elect a new committee and President, and also the day on which we have to decide whether we support the Resolutions being debated at the NFWI Annual Meeting in June. It was also the day on which the President had to announce the sad news of the sudden death of a long-time committee member, Jean McGauran. Jean had served the WI faithfully for many years and had held the post of Speakers’ Secretary until quite recently. Her death in April had come as a shock to everyone. Her funeral will be held on Friday 24 May at 11 am at St Luke’s Church, then Harlow Crematorium at 12.15 pm.

With regard to the Resolutions, Harlow voted unanimously in support of both, so the Link representative (who is from our WI this year) will be carrying our voting instructions to Bournemouth in June along with the instructions from the other three Institutes in the Link.

The Report and Accounts for the year ended 31 December 2018 were circulated; the Report contains a summary of Harlow WI’s activities during that time, and the Accounts reflect how the WI managed its money. 2018 was rather different from previous years as it was the period when we started the refurbishment of part of our Hall (which is ongoing), and looks financially different as we received the first of two generous grants from Essex County Council’s Community Initiatives Fund. Although the accounts have not yet been signed off by the Independent Examiner, the meeting voted to accept the Report & Accounts, subject to there being no adverse critical observations by the IE (in which case the Accounts would be presented again at another meeting).

There were no additional nominations for the committee so the nine previous members, who had all indicated their willingness to stand again, were re-elected. Of these, Christine Dellow was again elected as President.

The May competition was for a small home-made item and was won by Christine Dellow. Birthday flowers were presented to three members, and the Raffle was drawn. The afternoon’s cup of tea was augmented by cakes kindly provided by Jean Wright.