Review: I Talk To The Clouds and They Cry with Me

AS part of mental health awareness week, the Harlow Playhouse team have put on a series of events including twice daily performances of this beautiful piece of theatre, centred around the story of Steven, a man who struggled from depression. The play is set in a spectacular 3D cloud structure which is worth seeing itself and involves some audience participation which is particularly powerful considering the subject matter. 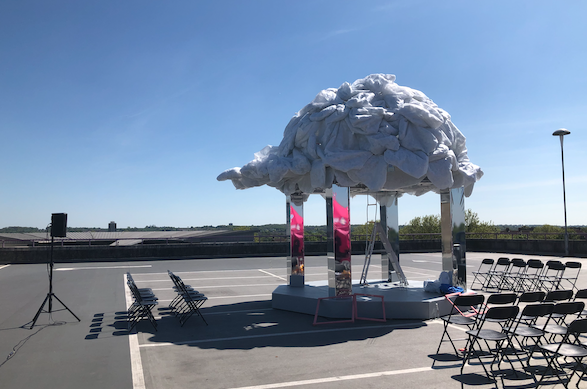 Emotional, thought provoking and sometimes funny this play was also utterly engrossing. So much so that this reviewer forgot that it was raining during the performance.

Credit must go to Rhiannon Faith as well as the two performers, Stuart Waters and Nikki Watson, for creating a piece of work which is both a joy to watch but also doesn’t shirk away from addressing the issues of mental health, of male suicide and the importance of talking about both.

As mental health awareness week comes to an end I think what I went away from the play with was further recognition that we should be aware of our own mental health and the mental health of others all year round. With high profile male suicides like Keith Flint and Robin Williams in recent years it is clear that depression effects everyone, even those who are perceived as successful.

This play cemented the view that depression is an illness like any other and that battling with this illness is a daily struggle. Those that face that struggle are far stronger than any of us give them credit for.

As people do become more and more aware about mental health and illnesses like depression I hope we as a society can be more understanding, move away from this ‘man up’ culture and have more confidence that we can talk about mental health freely and without stigma.

Once again well done to everyone involved, I hope the show can return to Harlow for others to experience and learn from.