AS a music loving young teenager, the highlight of my weekly television viewing was a Thursday evening at 7pm. Top Of The Pops was essential viewing in our household, introduced with its iconic theme tune, and as I progressed through my teenage years, I soon discovered the origin of the specially recorded CCS cover version of Whole Lotta Love. As my musical tastes expanded, I moved on from the likes of Noel Edmonds and DLT and TOTP, and they were replaced by Fluff Freeman, Jonnie Walker, The Old Grey Whistle Test, Nicky Horne and Radio Caroline. Led Zeppelin were staples for these presenters and programmes, their melding of blues, psychedelia, folk and rock being an almost natural progression from guitarist Jimmy Page’s previous band The Yardbirds. John Bonham’s death in 1980 saw the end of Led Zeppelin as a physical entity, (the ill fated Live Aid performance, and Ahmet Ertegun Celebration Day gig aside) but their music and influence lives on to this day, seemingly stronger than ever. A quick search on the interweb reveals at least half a dozen tribute bands dedicated to keeping the Led Zeppelin flag well and truly flying. 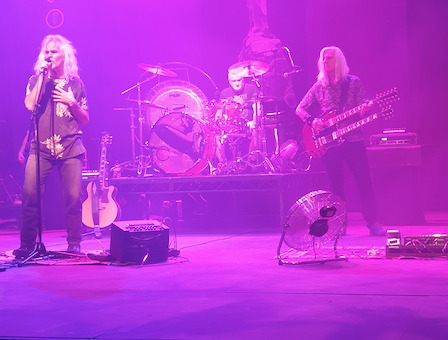 The bar in the Playhouse was buzzing on my arrival, despite the show not being sold out, and the vast majority were obviously Led Zeppelin fans from back in the day, with a few original faded tour t shirts in evidence. Those that had seen the original band in their heyday may have noticed the lack of Marshall amps on the sparsely laid out stage, but all the other elements were in place – a rack of Gibson guitars, including the fabled 18 string double neck, a theremin, and the huge gong situated to the rear of the drum riser.

Whole Lotta Led proudly proclaim on their website “no wigs, no costumes, just music”. As the intro music finishes, and they launch into Good Times, Bad Times, it’s clear that their statement is not just posturing. Whilst their choice of attire is firmly in keeping with the era, and some fairly impressive manes are in evidence, there is no mimicry. Lee Pryor’s vocals have more than a passing nod to those of Robert Plant, and a vocal effects set up means he can recreate some of the studio based parts for some tracks, but that’s pretty much it – none of Percy’s trademark moves, no attempts to replicate Jimmy Page’s flamboyant guitar style. That’s not to say that the musicians can’t cut it, but they seem happy to let the music speak for itself. Homage would be a better choice than tribute.

The first half of the show rattles through several of the obvious choices, interspersed with a few deeper cuts, and also sees the introduction of keyboards for the necessary numbers. The atmosphere in the auditorium seemed a little subdued, although there was plenty of applause as the intermission came round and the assembled multitude headed for the bar.

This year is the 50th anniversary of Led Zeppelin II, and the second half of tonight’s performance was dedicated to the iconic album in full and in sequence. As the all too familiar riff of album opener Whole Lotta Love flows from the PA system, the ambience in the theatre immediately steps up a couple of notches. The band in turn seem to notice this, and up their game accordingly. As they work their way through the tracklisting, the quality of musicianship becomes ever more apparent, and nowhere more so than Moby Dick. The original clocks in at around 4:20, although there are reports of Bonham performing for over 30mins on stage. Tonight’s effort lasted around 7 mins, and was enthusiastically received by the audience. Album closer Bring It On Home was followed by the obligatory Stairway To Heaven, and an encore pairing of Black Dog and Rock And Roll brought a standing ovation.

The debate surrounding tribute bands has been ongoing for over a decade, and shows no sign of subsiding any time soon. However, for those of us who weren’t fortunate enough to have caught Led Zeppelin live back in their pomp, Whole Lotta Led give a tiny inkling of what we may have missed.

And for a band that has been so influential to the British music scene for over half a century, is that really such a crime?