ALFIE’S sleep has recently been haunted with nightmarish visions of wolves and hounds leading him to develop his own freakish outlook on life, comparing everybody he meets and their behaviour to foxes, wolves and everything in between. 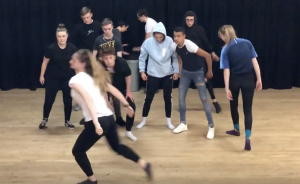 Always struggling to find a sense of belonging Alfie has concluded he’s a stray, a mongrel. In this production the audience follow Alfie on his journey of self-discovery, survival and consequences. Will Alfie run with the foxes or hunt with the wolves?

That decision lies in the hands of the audience. ‘Mongrel’ is an innovative production that tackles the issue of gang-crime in the youth of today.

The first of many original plays birthed from the Harlow Playhouse Young Practitioners program, Harry Bailey and Leo Shepherds directorial debut is not to be missed.

Brought to you by The Sned-It Company, in partnership with the Harlow Playhouse and Harlow College.