ROBERT Halfon, MP for Harlow, has today continued in his campaign to end the suffering of animals, particularly horses and ponies tethered by the roadside in and around Harlow.

In his Parliamentary Motion, of which he is the lead signature and has already gained cross-Party support from a number of other MPs, Robert has drawn attention to the need for urgent reform the Animal Welfare Act 2006. Time and time again, Robert has sought intervention from Harlow Council, Essex Council and the RSCPA, to free the tethered horses in Harlow and ensure they are given the proper care they deserve. However, each time he has been informed that there are not sufficient grounds at law for the authorities to get involved.

Today, Robert is calling for legislative reform of the Animal Welfare Act 2006, as well as the Code of Practice for the Welfare of Horses, Ponies, Donkeys and their Hybrids, to impose stronger duties on local authorities to take action to free tethered animals where their welfare is not being respected, and to provide Councils with the necessary basis and resources to do so. 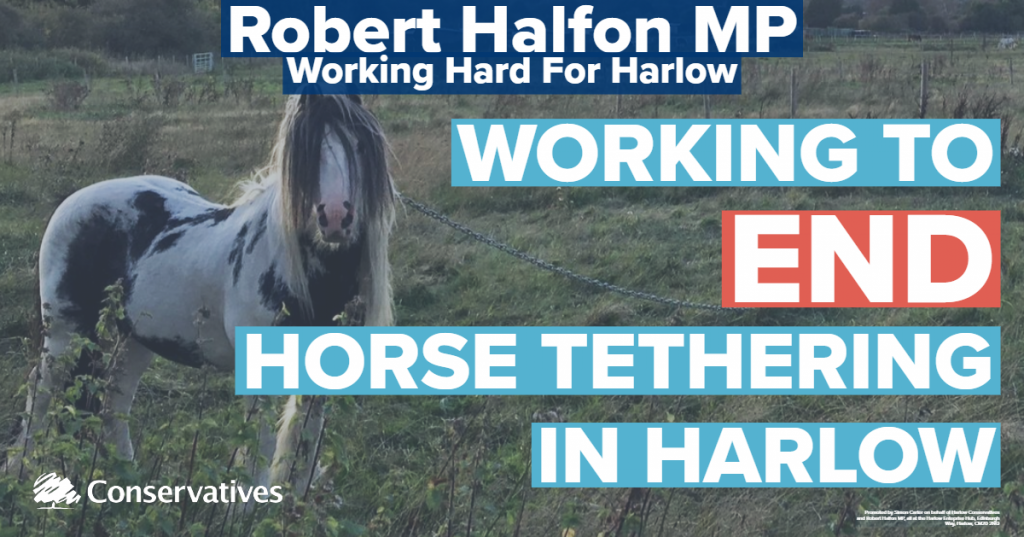 Robert Halfon said: “Enough is enough. It is time for major legislative change to ensure that these beautiful animals are no longer left without food and water, tethered by the roadsides in Harlow. I’m calling for stronger powers for local authorities so that they can release tethered horses and ponies from their suffering.”

The text of the Parliamentary motion, or Early Day Motion as it is formerly known, is as follows: That this House recognises the importance of ensuring the safety and welfare of all sentient beings, including horses, ponies and donkeys; further recognises the cruel treatment that is currently taking place whereby these animals are left tethered by roadsides or in dangerous locations around towns often without food or water; acknowledges that local authorities have chosen not to intervene to rescue tethered horses on the basis that the Animal Welfare Act 2006 does not provide strong enough grounds to do so; further acknowledges that this inaction is in spite of clear infringements of the five freedoms set out in the 2006 Act, including the need for a suitable environment and to exhibit normal behaviour patterns; and therefore urges the Government to reform the 2006 Act to impose stronger measures that call on local authorities to intervene and rescue tethered horses in order to prevent their long-term suffering.

The full Early Day Motion and a list of its signatories can be found here: https://edm.parliament.uk/early-day-motion/53079/horse-tethering-animal-welfare-act-2006-reform