THE latest crop of budding Jamie Olivers to graduate from Harlow College’s Young Chef’s Academy held their celebratory dinner at Down Hall, Hatfield Heath, on Wednesday 12th June 2019. Guests arriving were treated to a canapé reception and drinks, followed by the main course; the culmination of eight weeks of cookery training in the College’s state-of-the-art skills kitchen. The night concluded with the graduation ceremony where parents and family friends could sample the delicious cuisine served up by the chefs of the future.

The Young Chef’s Academy is an eight week culinary skills course that encourages young learners to attend college to build on the skills they have learned at school during their food tech lessons.

Increasingly, schools are not offering food tech anymore so signing up for the Young Chef’s Academy is a great way for learners who have shown an interest in cooking to gain some basic skills.

During the eight week course learners are taught many new skills and techniques and will work on a variety of dishes including pasta, meat, fish, vegetarian and hot and cold desserts. By the end of the course they will have the skills and confidence to prepare a three course meal. 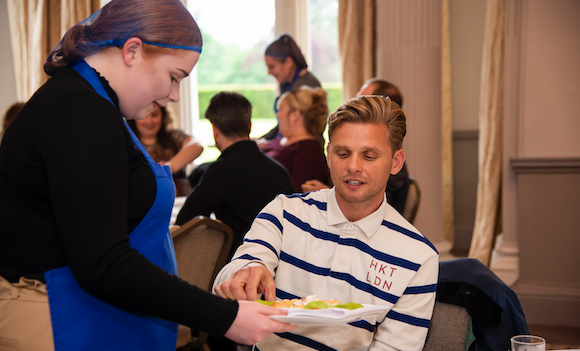 One of the proud parents at the Graduation Ceremony was television presenter and reality TV personality Jeff Brazier, whose son Fred was part of the Young Chef’s Academy.

“It has been incredible to come and see how the past few weeks have culminated into something so slick and professional; something I would expect to experience having a meal out with friends. To see my son as part of a team of students all pulling together to create this experience makes me feel incredibly proud.

“In terms of a life skill, if your child can cook for themselves and not just put things in the microwave or eat pot noodles, then that for me as a parent feels like job done to an extent.

“For my son to take such an interest in what food he’s putting into his body is a massive life skill that as a parent I want him to have.

“Tonight’s food was excellent. Every one of the Young Chefs has done really well.”

“As tutors we see the learners develop over the weeks and grow in confidence. They also make new friends and communication skills automatically develop.

“We feel very proud on graduation night as all the parents gather for their meal. Watching their faces and the pride they obviously feel makes the Young Chef’s Academy so worthwhile.”

One of the Young Chef’s Academy graduates described the experience as “the opportunity I needed to start me on my new career path.”