WEST End stars took time away from the big stage to teach students their famous routine.

Layton Williams plays the lead role of Jamie in Everybody’s Talking About Jamie at the Apollo Theatre, London.

Along with fellow cast member Jordan Lavinier, who plays Cy in the show, Layton spent time with students at Burnt Mill Academy, in Harlow. 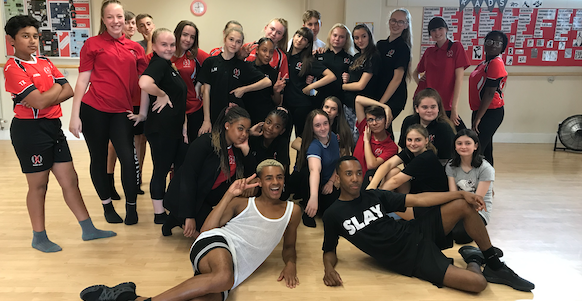 He told them: “Work hard, be passionate and understand that it won’t come as soon as you might have hoped. It can take years to get one job. But, if it is your passion and is something you want to do, stick with it and it will work out for you.

“This has always been a part of my life; something I have wanted to do. When you do a job you love, it doesn’t feel like work.

“I have messed up with lyrics and my choreography many times, but it is about giving the face and the personality. You have to be thick-skinned in this industry. I’ve had more knock-backs than jobs; in five auditions, you might get one and that is fine.

“I’m from a council estate in Manchester. I didn’t even know what the West End was when I was 11. But, you do not have to be from a certain background or have money to make it. We have all been through struggles; you just have to rise up and go and kill it!”

The Year 9, 10 and 11 dance, music and drama students spent the afternoon learning the routine to And You Don’t Even Know It which appears in the show.

Georgina Woods, head of performing arts, said: “We wanted to give students a treat following their exams this summer. It was an opportunity to show them what it would be like to get a job in the industry.”