Review: Buddy at the Harlow Playhouse: Keeping the music alive! 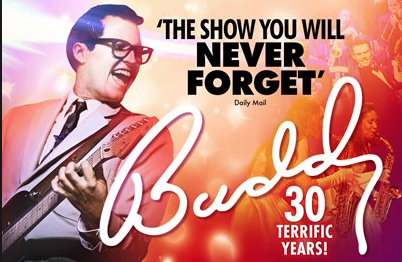 THERE are standing ovations and there are standing ovations. The standing ovation the audience gave at the end of the Wednesday night’s performance of Buddy was one of warmth, wild enthusiasm and gratitude; all directed at every person responsible for making sure that February 3rd, 1959 might have been the day the music died but August 28th, 2019 proved to every single person on their feet that the legacy lives on.

This production that is about to go on a UK tour to celebrate 30 years of The Buddy Holly Story has the music at its core. We have seen other productions that spend more time on character development. This one knows what the audience wants and delivers it in spades.

Buddy, played by AJ Jenks is an understated Buddy, in keeping with an accurate depiction of the man. In many ways, he lets the music do the talking. From the very first bars as Buddy Holly and The Crickets shake up a word used to country and western, the music is the driving force behind the musical. However, we are left in no doubt as to Buddy’s singular vision.

This is very much an ensemble/team pice with every actor devoted to making sure that this 30th anniversary production is not just faithful but faultless.

It doesn’t need to overstate the key moments: the lyrics to Peggy-Sue, meeting Maria-Elena, playing the Apollo in Harlem. Each part is played naturally and affectionately.

Even though this was the first night (and a preview night at that), each actor looked like they really enjoyed being on the stage and enjoyed being part of this legacy.

The sets were very effective, especially the early pieces, the Apollo and The Surf Ballroom.

The Surf Ballroom finale was probably what got the audience on their feet. It was a tumultuous celebration of the last show Buddy and The Crickets plus Big Bopper and Richie Valens did. If you only came for the last twenty minutes, then you would have got value for money.

People of all ages were at the show and quite rightly. Musicians of all ages are still influenced by this music. To many, Buddy was one of the original punks, shaking up the music scene.

You left the Harlow Playhouse thinking about all those songs and he was just 22 when he left us.

The thirtieth anniversary tour of Buddy is a wonderful celebration of his music. We have used the words underrated and faithful but don’t think that is damning with faint praise. This was a production where every person, on and off stage, gave everything to keep the music and legacy of Buddy Holly alive. Rave on!

Details of tickets are below.