EVERYTHING I SEE I SWALLOW 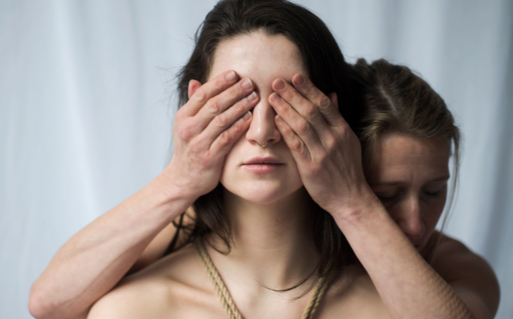 An art curator discovers that her daughter has amassed over 50,000 followers by posting semi-naked images of herself on Instagram. When does art become pornography and vice versa? How does a mother protect her daughter and when does protection become control? How does a woman defend the objectiﬁcation of her own body and the gaze from those around her? How are the lines drawn and how is the rope tied? And so begins a battle of wills, beliefs and family values as the bond between mother and daughter is put to the test.

Fresh from the 2019 Edinburgh Fringe Festival where they won 2 awards – The Scotsman’s Fringe First Award and Broadway World’s Best Circus/Physical Show, Shasha & Taylor Productions bring their debut show Everything I See I Swallow to audiences as part of an autumn 2019 tour.
Tamsin Shasha and Maisy Taylor are aerial performers with a generation between them, sharing an interest in female sexuality and its place in the modern world. Tamsin is artistic director of Actors of Dionysus and an experienced actor, performer, director and producer. This is her 4th aerial project, after Bacchic, Medea and Helen. Maisy graduated with a first class honours degree from the National Centre for Circus Arts in 2015, and has spent the last few years in strip clubs and on the London cabaret scene, exploring the cultural and political significance of female sexuality and its relationship with performance.

Both artists see Swallow as a forum for discussion, particularly in relation to young women and the pressures of social media. Tamsin says ‘It’s about a young woman who is not a victim in any sense and who chooses to express her sexuality in a way that many find uncomfortable’. Maisy says ‘The play’s ultimate message is positive and offers hope and understanding for the future’.

‘Taylor and Shasha’s aerial work is hypnotic and exquisitely choreographed… Intergenerational feminism, sexuality and objectification presented in a spellbinding piece’ ★★★★ The Stage

‘a gorgeous evocation of intergenerational schism and mutual understanding’ ★★★★ The Independent