Review: Another fine performance as Stan Laurel by Jeffrey Holland

Review: And This Is My Friend Mr Laurel
Harlow Playhouse: 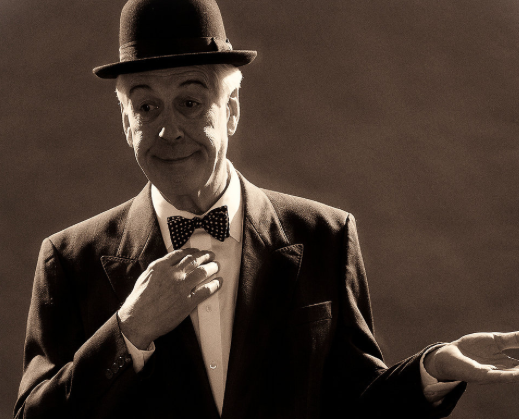 THERE is a magic when an actor is able to transform his face into the character he plays.

When Jeffrey Holland’s Stan Laurel speaks to an invisible Oliver “Babe” Hardy on his sickbed, he is really Cumbrian lad, Stanley Jefferson but when the play cuts away to short scenes, the veteran actor’s whole visage is that of the famous black and white movie star that we love and adore.

This reviewer saw this play at the Edinburgh Festival in 2018 and so was very pleased that Harlow Playhouse brought it down.

The intimate Theatre 2 was packed with many Harlow theatregoers enthralled at Jeffrey Holland’s performance.

Jeffrey Holland is able to deliver the frankly surreal lines that Laurel delivered. They are such good lines that they could be ruined in the wrong hands. One of this reviewers favourites is “A horse may be drawn to water but a pencil must be led” Holland delivers it beautifully.

This is a poignant play with Laurel realising that they will never perform again and for every reflection on triumphs, it is regrets and frustrations that cloud his thoughts.

It is a touching, thoughtful performance by a comedian who clearly has great respect for the subject.

The script also manages to include little enlightening biographical references such as the derivation of Hardy’s nickname “Babe”.

Light but layered, yes poignant but you still left the auditorium with a smile on your face.

And you know, it still is a long distance from Phoenix Arizona!

After the interval, Jeffrey Holland hosted a Q and A where he was able to answer great questions from the audience that covered his research for the show, has views on th elfin Stan and Ollie as well as a few questions on Hi-de-Hi.