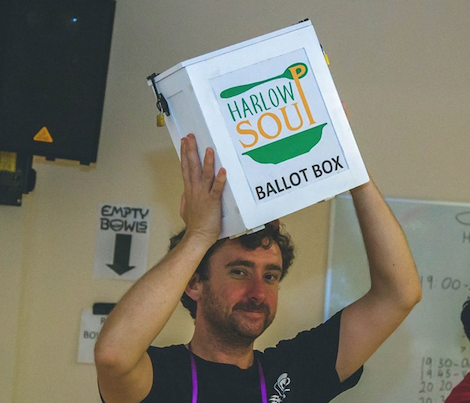 HARLOW SOUP, which took place on Thursday 29th August at Pemberley Academy, raised £660 for winning project Harlow Stroke Support group enabling them to provide their service users with a professional attending to their personal care needs.

The seventh Harlow SOUP at Pemberley Academy saw over 100 people in attendance, all donating a “pay as you feel” entrance fee on the door for a chance to hear about inspiring community projects which benefit Harlow Town. 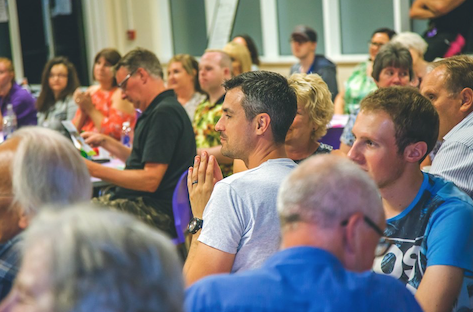 The event featured four community projects all hoping to secure the funds raised on the door with only four minutes to pitch their idea.
After hearing all four projects community diners voted for their favourite project and Harlow Stroke Support group were awarded the money after a very close vote. Attendees also got a chance to listen and join in with fantastic singing from the Voices of Harlow Choir. As well as the live entertainment, there was also a range of delicious food including homemade bread, cakes and soups including a Mexican Bean Soup which was voted for on social media to be served up to hungry guests.

The three other pitches were also extremely well-received by diners at the event, and included Sam’s Place who work with children with additional needs in Harlow, Singing for Memories who work with dementia patients on the Gibberd Ward at PAH using music to enrich their lives, and Cool Connections which is a social club run by Accuro for children and young people with additional needs.

Winners from the previous Harlow SOUP event Pact for Autism, a local charity which supports children with autism and their families, presented to community diners about how they had spent their money.

The next Harlow SOUP event will take place on Thursday 28th November, and submissions are now open for projects to be considered for the next soup. The only criteria for project submissions is that the project benefits the town, you do not need to be an already established group.

For more information or to submit your project for consideration for the next Harlow SOUP please visit www.harlowsoup.co.uk