Little Parndon pupils have picked their head boy and girl for the year ahead. 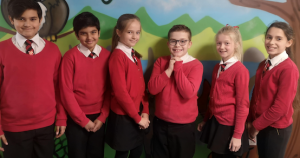 Pupils have picked their head boy and girl for the year ahead.

A TOTAL of 23 pupils at Little Parndon Primary Academy, in Harlow, put themselves forward for the roles.

Having submitted their applications and undergone a shortlisting process, 13 pupils stated their cases in front of an assembly before a decision was made.

Kirstie Clark, acting deputy headteacher, said: “I issued job adverts asking applicants to outline their qualities and demonstrate examples of how they live our school values.

“The head boy and girl and their deputies will lead by example and act as role models to the rest of the school. They will help in assemblies by reading out the meaning of the word of the week and giving examples of how to use it, as well as taking on lots of other responsibilities around the school.

“It was a really tough choice, but the children voted and selected who they wanted.

“The confidence and enthusiasm the candidates showed during their presentations was wonderful.”

The role of head boy has been given to Jamie Pickett and head girl to Melissa Bull. Their deputies are Lola Tucker, Olivia Robinson, Ayaz Ali and Alex Danacica.