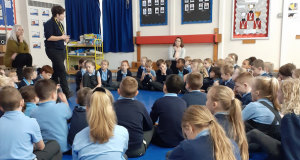 TO help young children to have a better understanding of Brexit and the impending election, a Harlow school held a session on politics and democracy.

Roydon Primary Academy, in Roydon, invited Robert Halfon, Harlow’s most recent MP, and Sky Yarlett, from the Houses of Parliament, in to speak with pupils.

Mr Halfon gave an assembly on what the role of an MP is and what his day to day tasks are.

He discussed democracy with pupils, answered their questions and met with the school council to find out about their work, including setting up a new rewards system in school.

Miss Yarlett spoke with Key Stage 2 pupils about democracy and how Parliament works.

She also held workshops where pupils learned about debating and how laws are passed.

Headteacher Michael Clark said: “Many of the children are talking about sophisticated topics, such as Brexit and the election, so we wanted them to be able to apply this to a real-life context.

“To speak to both Robert and Sky gave the children a wonderful opportunity to really understand what happens inside the Parliament building and how laws are made democratically.

“We are very thankful to both our visitors for coming to see us.” 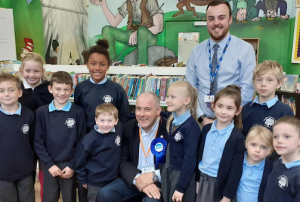