A SEVEN-year-old has launched a weekly virtual disco to keep his classmates’ spirits up during the Coronavirus shutdown.

Sonny Tyler took inspiration from his DJ dad Terry who turned the cancellation of his gig work in Harlow into a positive by launching Facebook Live parties. 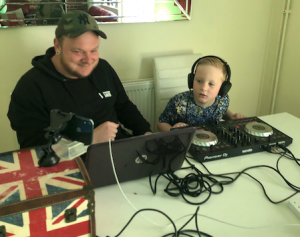 Keen to put smiles on the faces of his friends at Freshwaters Primary Academy, Sonny asked his dad to teach him the ropes.

The Year 2 pupil quickly picked up the skill and instantly launched a weekly online disco.

Proud mum Katy, learning mentor at fellow BMAT school Sir Frederick Gibberd College, said: “My husband DJs in his spare time, but all of his work has been cancelled due to the Coronavirus. People were really looking forward to his events, so he decided to run them from our living room! It was a last-minute decision, but 500 people watched and sent their requests for songs. People really got into the spirit of it and it was a good laugh. It was wonderful. 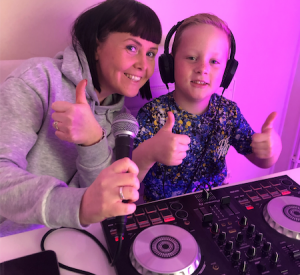 “Sonny said he wanted to host a party for his friends at Freshwaters. My husband showed him how to queue the songs up and what buttons to press and we put together a poster for him.

“About 87 people watched on and joined in. We had other parents sharing videos of their children dancing in their living rooms. He dedicated his last song to his school friends and told them to stay safe. He absolutely loved it.

“He knows his dad is a DJ, but I don’t think he really understood what that meant until all the equipment was put up in the house. It is definitely not something he would have learnt without the shutdown.

“Sonny is very giving. He said he wanted to make his friends smile as he misses them. I am really proud of him.”

Parents of children at Freshwaters are being urged to rediscover their forgotten hobbies and hidden talents to share with their children during the Coronavirus shutdown.

Headteacher Jackie Diggle said: “I sent out my weekly newsletter asking parents to share pictures of their children learning new skills and we have been inundated with stories from the Freshwaters families describing the various activities they have been doing with their children.

“As teachers, we always talk about making the curriculum more creative and this difficult period has given us and the children an opportunity to try something different. The next step will be to make sure we continue to be creative when we return to school and share our new skills.

“Clearly, I can rely on Sonny for any future school discos!”