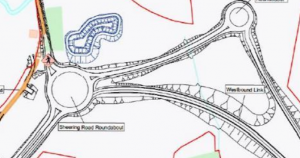 FUNDING has been conditionally agreed for a £600 million brand new hospital near the M11, Princess Alexandra Hospital Trust (PAHT) has announced.

An initial government commitment of £350 million was made last year as part of the government’s hospital and health infrastructure programme.

That however was not going to be enough to pay for a brand new build on fields near the new junction 7a for Harlow.

This was the trust’s preferred option and the only option which would have met the government’s requirement that development as part of the infrastructure programme would have to be completed by 2025.

PAHT was informed by the government on March 30 that £598million – the cost of a new build – would be forthcoming subject to some requirements being met by June.

The hospital has also announced that a major public engagement exercise will start in the next two weeks and run for the next five years through the construction phase which itself is due to start in autumn 2022.

Before that the hospital also has to submit its outline business case due by Christmas and a full business development case to be finalised by early 2022.

PAHT says its tailored public communications and engagement programme will ensure all audiences are at the centre of the evolving and enhancing plans for the new hospital.

Although the current relocation proposals do not involve any changes to the range of services being provided, PAHT has been actively engaging system-wide stakeholders and patients on the redevelopment and relocation plans for its estate.

CEO of PAHT, Lance McCarthy, said: “We want to make sure we are involving all the public in those conversations and in the development of and the enhancement of plans to build the new hospital.

“It is important we get community feedback on what our proposals are.

“We have an ambitious aim to make it the best engagement programme that anyone in the NHS has seen. That is our starting point and aim and we want to make it as innovative, broad and far reaching as we can.

“While Covid-19 has forced us to think about non-traditional ways of engaging the flip side means it has enabled us to think more innovatively about how we can do things in a very different way.”