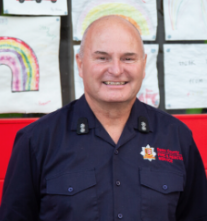 WATCH Manager Jeff Collins started his career with the Service 37 years ago at Old Harlow fire station in March 1983. Tomorrow, Tuesday 30 June will be Jeff’s last day ‘on the run’ when he says farewell to his colleagues and the Service to begin his retirement.

Jeff looks back on the last 37 years’ of Service and the memories at Old Harlow fire station.

Jeff said: “In 1983 I was working at an electronics company and was part of the ‘works fire service team’ on the site. One day I got talking to the manager at Old Harlow fire station and he invited me down to the station, as I had some experience in firefighting I signed the paperwork and passed my medical to join up as an on-call firefighter. 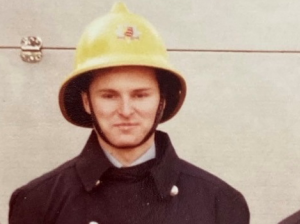 “To think that was 37 years ago – it seems hard to believe – as time has gone by so quickly. I have seen a lot of changes over the years, especially with the equipment we use at RTC’s and the PPE we use now, which has improved considerably.”

Once Jeff left his employment at the electronics company he then spent 14 years working at a local hospice, along with balancing his on-call commitments with his caring role and looking after his own family. For the last two to three years Jeff has dedicated all of his time to working at Old Harlow fire station, with his Watch Manager role being his main employment to date.

“My family have always been supportive of my role as a firefighter and I am proud to say my son Kirk has followed in my footsteps, as he is also an on-call firefighter at Old Harlow and an on-call liaison officer with the Service. It’s nice to know there is a family connection to the fire station when I retire.” Said Jeff

“Old Harlow fire station has survived two world wars and a horse and cart was the mode of transport back then for the crews, with the horses kept up at the local George Hotel, and to think that in ‘2020’ firefighters are still turning out from this fire station is something that is always in my thoughts when coming to work here.”

Jeff added: “It goes without saying, saving people’s lives has been the most rewarding part of my career, when a member of the public walks in to the fire station on an open day and thanks you personally – it doesn’t get any more rewarding than that.”

“The most crucial part of any fire and rescue service is its people and I can honestly say that I am proud to have been part of and served a #professional emergency service and to have helped keep the community as safe as possible for so long.”

Jeff is looking forward to his retirement and spending more time with his family and grandchildren, and also going travelling on his house boat with his wife.