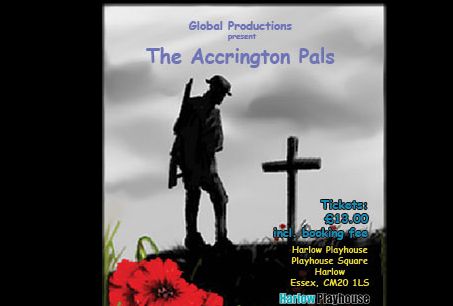 THE ACCRINGTON Pals is not an easy play to perform. The Peter Whelan play charts the life of ordinary Lancastrians before they went off to war in 1914.

Life is pretty grim at home and it is about to get grimmer.

The whole play is held together by the matriarchal May, played by Sue Macpherson. Sue pitches the part perfectly as May tries to keep mind and body together as well as a fear and yearning for young artist Tom, played by David Baker. David also performed very well as the young artist with burning desire and a lust for life.

It was the shadow of inevitability that hangs over the piece and the production, thanked to the design of the set and the pace and judgement of director and actors that gave a claustrophobic feel.

But there was humour, often bawdy northern humour, an example of which was the performance of Eve by Jennifer Gillin. She conveyed a huge amount of warmth and emotion but with depth as well.

It is a long play, with many changes, that require a great deal of discipline. The actors all interacted very well. Young actors such as Tanya Mcpherson and Abigail Baker were full of vitality whilst veterans (sorry Chris!) such as Chris Millington produced a haunting cameo role as the CSM.

As we look back on the Great War, sone of us don’t want chocolate box versions but rather gritty reflections such as The Accrington Pals.

A stirring end and well done to the director, Michael Philips, for his deft production.