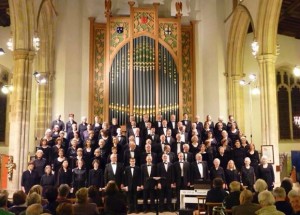 EXIT PURSUED BY A HIPPOPOTAMUS! This is not a stage direction for Harlow Chorus’ 40th Anniversary concert at Chelmsford Cathedral on 16th April ay 7.00pm, but a ‘moment’ in the life of composer David Fanshawe who inadvertently hit a hippo on the head with a canoe paddle during his journeys across Arabia and Africa collecting music for African Sanctus. Fortunately he survived but the tape recorder drowned. Other ‘moments’ included a crash-landing in the bush and being thrown into prison for recording the Royal Drums of the Sukumu Kings minus his shoes.

The audience will hear those drums and much more – tribal dances, croaking frogs, a rain song, cattle songs – in the fabulous sound world Fanshawe created for a piece which fuses different peoples and their music into a latin Mass, one moment pulsating with rhthymic energy, the next creating passages of great lyrical beauty. There won’t be a dry eye in the house as the children from Henry Moore Primary School sing Fanshawe’s lovely setting of The Lord’s Prayer. Soprano Emily Yarrow, Harlow Chorus Training Choir, percussionists Graham Instrall and Tim Gunnell and our own wonderful pianist Susan Graham Smith complete the line-up. Alexander Chaplin will command all these forces with his customary verve. We will rock that cathedral.

Also in the concert is the world premiere of a new piece by Cecilia McDowall commissioned by Harlow Chorus, a charming arrangement of Bless this House by Paul Ayres and George Shearing’s delightful Songs and Sonnets from Shakespeare.

Harlow Chorus’ choral birthday party starts at 7.00pm and tickets can be bought online (no booking fee) at www.ticketsource.co.uk/harlowchorus or on the door: £18, £16, £14 with £5 for under 18s. There are still one or two seats left on the audience coach picking up in Old Harlow, Sawbridgeworth and Bishops Stortford – email [email protected] for details.