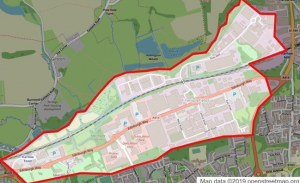 A DISPERSAL order will be in place in Harlow tomorrow, Saturday 11 January, following reports of an unauthorised car meet.

The order covers Oaks Retail Park off Edinburgh Way from 6pm on Saturday 11 January until 2am on Sunday 12 January, it has been authorised following concerns about anti-social behaviour and dangerous driving.

It gives an officer or a PCSO the power to move individuals or groups from a specified area. If they return to the area within 48 hours, they may be arrested.

Inspector Walker from the Harlow Community Policing Team said: “Whilst we want to support car enthusiasts who meet in sensible locations with the landowner’s consent with roadworthy cars and are respectful to the local community.

“We will take action against those who use our roads as race tracks and disrupt the local community.

“We know that these events can often give way to anti-social behaviour, dangerous driving and other situations that can put attendees and members of the public at risk.

“By using this order we can make sure that the businesses and residents who would otherwise be impacted can continue to go about their evening safely and undisturbed.”

As per the map, the order runs between Burntmill Lane in the west, including Harlow train station, to the point of the A1019 parallel with the mid-point of Harlow Town Park.