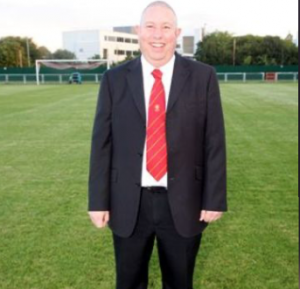 HARLOW Town FC Secretary Ray Dyer has called time at the Club after 10 years in the role, with current Match Secretary Donna Harvey taking on the job.
Ray, who reportedly knows the Isthmian League Handbook from cover to cover, has been a much loved and widely respected figure around the Club for many years.

After spending over three decades as a supporter, Ray stepped up to the Secretary role in 2010 and has provided countless hours of service to the Club.

There can’t be many Secretaries that have their own song from their club’s supporters, but the man that “used to bang the drum…and now sits on his bum” has kept a place in the hearts of the fan-base since donning the Club Officials tie.

Ray moved to Cumbria several years ago for a more relaxed pace of life, whilst still maintaining his Club duties, and he’ll now be able to enjoy his idyllic surroundings without the need to be checking his e-mails several times a day.

He promises us that he will, of course, remain a supporter, and we look forward to welcoming him to the Club on his occasional journeys back south.

We would like to take this opportunity to thank Ray for his hard work and years of support. As a token of our appreciation, the Club have bestowed upon Ray the honour of Vice President, in recognition of his many years of service.

Everyone at the Harlow Town FC would like to wish Ray all the best for the future, and we look forward to seeing him at the Club again soon.

Although Ray will be greatly missed by all at the Club, we are delighted to announce that Donna Harvey, who has been Match Secretary for almost five years, will be stepping up to fill the role, adding the Club Secretary duties to her existing match-day responsibilities.

With her organisational skills, hardworking attitude and friendly demeanour, there is no-one better to fill the vacancy, and we all wish Donna the best of luck in her new role. Donna can be contacted on [email protected]