All children ‘will return to school in September’ 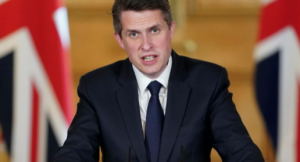 GAVIN Williamson tonight suggested class ‘bubbles’ will be doubled to 30 children to get all schools fully up and running in September.

The Education Secretary hinted at a doubling of the current group size as he underlined the government’s determination to have ‘every child back in every year group in every school’ after the summer holidays.

He said the ‘bubbles’ would in future be expanded to ‘include the whole class’ – which would be around 30 pupils. But he refused to give more details, saying full guidance for schools will be published over the next fortnight.

‘There are still going to have to be protective measures put in place to make sure children are safe,’ he told the Downing Street briefing.

Earlier, Boris Johnson solemnly promised that schools will return fully in September and hinted at an imminent shift on the two-metre rule – something that would delight business and Tory MPs.

Questioned by BBC education editor Branwen Jeffreys, Gavin Willamson says it’s “vital” to get children back to school. Coronavirus infection levels are decreasing and this is “incredibly positive”, but protective measures will need to stay in place to ensure safety in schools.

On social distancing, he adds that the review under way on the two-metre rule will be done quickly, but he can’t give an “exact date” for any changes.

“We’ve got to get Britain working again,” Mr Williamson says.

2 Responses to "All children ‘will return to school in September’"