Covid-19: RSPCA is bracing itself for a surge in abandoned animals 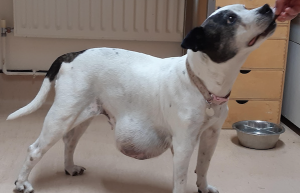 THE RSPCA is bracing itself for a surge in abandoned animals and fears the fallout from the Covid crisis could see more owners struggling to keep their pets.

During the summer months the charity received 370 reports about dumped animals in Essex.

This includes elderly dog Martha (pictured) who was found in a village near High Beech, Epping last June. She was found by a member of the public who caught her and then drove her to RSPCA Southridge Animal Centre in Potters Bar, as Martha was suffering with an enormous tumour on her belly. Staff at the centre took her straight to a nearby vet for treatment and the large mammary mass was examined, and it was decided that surgery was essential.

It is thought Martha was around eight years old, though she was not microchipped and was not wearing a collar. The mass was so large it covered so much of her little body and she must have been in so much discomfort, but despite this she remained loving and affectionate.

Centre manager Anna White said: “All the staff at RSPCA Southridge fell in love with her, including me. She was the sweetest dog I had ever known.

Vets successfully removed the mass from Martha’s body and it weighed a staggering one and a half kilos. Martha recovered well and her personality shone through.

Anna added: “I was realistic about the prospect of finding a suitable home for an older dog, who may potentially suffer a relapse from the tumour, so I decided to foster her myself as we had formed a strong bond. Sadly, Martha passed away peacefully last autumn, but I am content knowing my family and I gave her the best few months of her life, surrounded by love, affection, treats and fun.”

The RSPCA is braced for an even bigger impact this summer following the easing of lockdown and the financial impact on the coronavirus pandemic, and has launched an emergency appeal to continue its vital rescue work.

During the three months since lockdown began*, the RSPCA has received reports about 3,492 abandoned animals* – about 40 calls a day – including 1,509 dogs, 1,165 cats, 299 small furries such as hamsters, guinea pigs and ferrets and 275 exotic pets.

Dermot Murphy, head of the RSPCA’s animal rescue teams, said: “During lockdown we’ve seen pets become a source of comfort and support for people and it appears many people have taken on new animals. Fortunately during this time we’ve dealt with fewer abandoned pets however we are worried that as lockdown eases, people return to work, go on holidays or struggle financially we will be facing a massive surge of animal abandonments.

Dermot added: “Sadly summer tends to bring with it a surge in abandoned animals. We don’t know why but it may be a combination of the warmer weather making people feel less guilty about dumping a pet to fend for themselves and people doing away on holiday abandoning pets instead of arranging care for them.”

RSPCA rescue teams have been working throughout lockdown after being classified as essential key workers. The numbers of animals being cared for by the RSPCA has risen by more than 1,500 to 5,600** during the pandemic

Dermot continued: “This is the toughest year yet for the RSPCA despite the huge challenges, our amazing teams have been continuing to rescue animals throughout this crisis.

“I’d urge anyone struggling with their pet to ask for help. Animals have been there to help us through the crisis, please don’t abandon them now.”

What people can do if they’re struggling to care for their pets:
Ask friends and family for help
Contact your vet about payment plans, discounts or vouchers for neutering or any other treatment needed
Get in touch with local rehoming charities for advice
Visit the RSPCA website for welfare advice

To help the RSPCA continue to rescue animals that have been abandoned this summer, please visit www.rspca.org.uk/abandonments