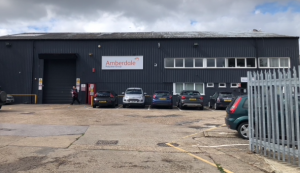 STAFF were left in tears at a Harlow factory on Friday after being informed that the company was re-locating over a hundred miles away.

Employees at Amberdale, part of the Polyclear Group, arrived on Friday morning at their work based on River Way in Harlow to be given the bad news by their bosses.

According to a member of staff, who did not wish to be named, they were gathered together by management and told that the Harlow factory was closing and relocating to Southampton.

According to their website, Amberdale manufacture a variety of polythene based products such as Flat Bags, Gusseted Bags, Pallet Covers and Base Sheets.

They are part of the Polyclear Group, which is based in Southampton.

YH understands there are around seventeen employees there.

YH contacted the Polyclear Group and a member of staff confirmed that they were “re-locating”.

We asked if there would be redundancies but they declined to answer.

YH further understands that there will now be a period of consultation but staff at not hopeful at being offered employment.

YH went down to the premises as former employees, some in tears, were leaving, clutching white envelopes.

A staff member added: “There has not been any mention of staff being re-located. I am not hopeful.

“Over the last few weeks, there has been little hints that this has could happen but this has still come as a real shock.”