THE cancellation of all rent arrears caused by the COVID-19 pandemic was one of the demands made at a socially-distanced rally in Harlow Town Centre on Friday (10th July) organised by Harlow Coronavirus People Before Profit Action Group, and supported by Harlow Trades Union Council and Harlow Defend Council Housing.

Mick Patrick, the Secretary of Harlow Trades Union Council and local Chair of Defend Council Housing, made the call in a speech in which he said that “Coronavirus has highlighted forty years of underinvestment and speculation that have made the housing crisis much worse. There are people living in much worse conditions than they did in the 1960s and 1970s. We now have permitted development, which has led to whole families living in inhuman conditions. We need to build 100,000 council homes every year for the next 20 years, just to make up those that have been sold off. We need to build a better future now. It won’t happen unless we make it happen.” 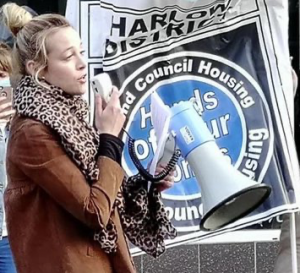 The rally was also addressed by former Labour Parliamentary Candidate Laura McAlpine, who said: “Everyone has the right to secure, decent, affordable housing; but there are millions of private renters across the UK who are being ripped-off by greedy landlords. Due to the lack of council homes, families are being housed in old office blocks like Terminus House, which are simply not fit for purpose. The government wants to relax planning laws, making it even easier for developers to create more of these office block conversions, but this type of accommodation should be prohibited altogether. The government needs to make public housing available to all by funding councils to build and renovate good quality housing. We need an immediate a ban on evictions for Covid-related rent arrears to ensure that renters who have already lost income due to the pandemic do not also risk losing their home too. Housing is a right, not a privilege.” 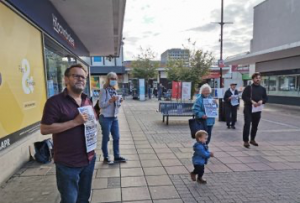 An estimated 227,000 private renters have fallen into arrears since the start of the COVID-19 pandemic, according to research published by Shelter on 6th July. The charity warns that they could lose their homes when the temporary ban on evictions ends on 23rd August.  It also found that 174,000 private tenants have already been threatened with eviction by their landlord or letting agent. The total number of private renters in arrears reached is now 442,000, double what it was in the same period last year.

The Times reported on 8th July that Sir John Armitt, the Chair of the National Infrastructure Commission, which advises the government, had said that a huge expansion of council housing will be needed to meet the government’s target of 300,000 new homes a year. However, figures released last week show that just 4,000 homes for social rent would be built this year, the lowest level since the Second World War.