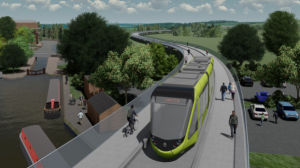 THE chair of Harlow and Gilston Garden Town has provided an update regarding their plans to improve the local transport network.

“These include enhancing existing and creating new walking and cycling routes alongside highway improvements that will be designed to manage congestion and prioritise public transport.

“The first phase of works will connect the new Garden Town Gilston villages to Harlow town centre and are planned to be delivered in 2024/25.

“Stages two and three are still being planned and the new Latton Priory neighbourhood of the Garden Town falls into these later phases.

“There is an outline proposal for a Garden Town metro system that would connect communities across the Garden Town.

“However, the metro system is just one of many initiatives being put forward for consideration and the Garden Town partners will need the time and opportunity to consider these initiatives in depth.

“It is planned that, over the course of the autumn, the ideas for a future Garden Town transport and travel network will be discussed by all partners and a decision on the commissioning of any further planning and network design work will be made collaboratively following those discussions.”