Let’s Hang On at Harlow Playhouse

ON Friday 21st and Saturday 22nd February, Let’s Hang On return to the Playhouse after their last sell-out show to take you on a musical journey through the prolific career of one of the most successful bands of all time ”Frankie Valli & The Four Seasons”. You will hear the story of these blue-collar boys from the wrong side of the tracks who wrote their own songs, invented their own sound and took the world by storm all before the age of 30. 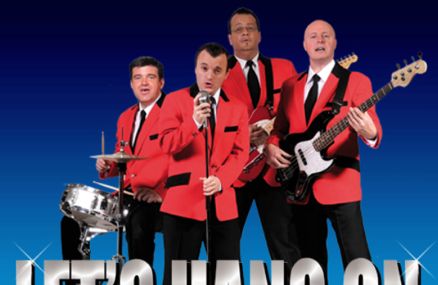 In the first part of the show Let’s Hang On take you back to the very beginning where it all began for these guys. You’ll hear tracks from the early 50’s when Frankie first joined the group and then with the addition of Bob Gaudio still recognised today as one of the greatest song writers of all time you’re treated to even more classic early material recreated live on stage with the greatest of accuracy!

Also in this first section of the show Let’s Hang On do something that is very rarely attempted in any live performance, and that’s acapella singing.

The stage is transformed into a street corner in New Jersey, four guys sitting on some steps under a street lamp singing doo wop got industry critics writing “PERFECTION” “AN AUTHENTIC MASTERPIECE” and “MIND BOGGLING ACCURACY”.

In the second part of the show its simply party time, all your favourite hits non stop, you really are guaranteed to be dancing in the aisles and singing at the top of your voices to “ Dec 63, Beggin’, Can’t Take My Eyes Off You, Grease, Working My Way Back To You, Who Loves You, Bye Bye Baby and many many more…

The whole show leads up to an electrifying finale when out come the retro red jackets and you hear that legendary falsetto vocal blow the roof off with “Rag Doll, Sherry, Walk Like A Man, Big Girls Don’t Cry… This really is a must see show for all the family, so book your tickets now.

Tickets are £22, £20 concession (including booking fee)