Review: Ed Byrne-Forty but frisky at the Harlow Playhouse 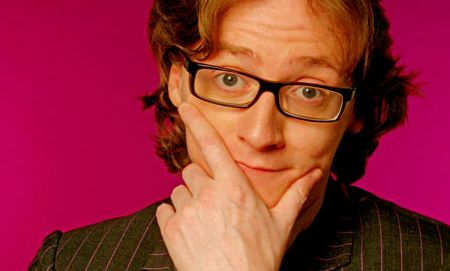 SPRING has sprung in Harlow, and comedian Ed Byrne is full of the joys of….being in his 40s.

The main auditorium at The Harlow Playhouse and the local-ish, he lives just outside of Bishop Stortford, Byrne is delighting in the privileges that come with surpassing the big 40, particularly the right to be inappropriately obnoxious. At all times.

A gag at his own expense on his resemblance to Vicky Pryce, the hassle of speed cameras and the modern motorist’s scourge ‘the drivers awareness course’. The ones you don’t pass if you leave in the coffee break. Byrne’s astute observation on the trials at being the class clown in middle age is well timed and elicits plenty of laughs.

He tackles all the big subjects including the joys of parenthood and why not to have kids. Recounting his attempts to get a vasectomy on the NHS demonstrates his ability to weave together a hilarious story. Sticking with the medical theme he announces that his hernia surgeon is in the audience as his guest and introduces him. It’s a nice touch that enables him to really bring his hernia sketch to life.

The odd local references including the ubiquitous roundabout and teenage pregnancy jokes hit the right note with the Harlow audience, he is laughing with them not at them.

When things turn to politics, his take down of the millionaire chancellor George Osborne and his unlikely role as poster boy for austerity, demonstrates a far darker wit. It’s this that takes him from funny to laughing until it hurts territory and is something the show could have benefitted from more of.

A natural stand up Byrne’s wide appeal is obvious, the show proves a great midweek comedy booking for The Playhouse.