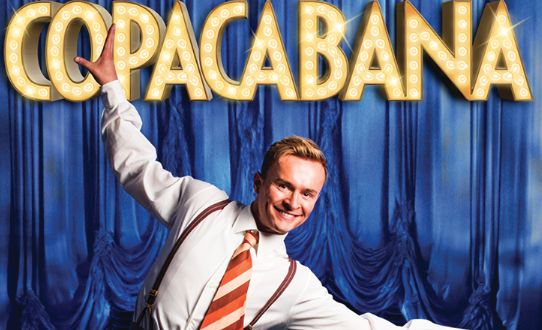 Manilow’s hit musical, Copacabana will return to the UK and tour in a new production this Autumn, playing at Harlow Playhouse from Thursday 2nd to Saturday 4th October. The musical, written by Manilow and his longtime collaborators Bruce Sussman and Jack Feldman, has not been seen in the UK for ten years.

Packed with original songs, dazzling costumes and dynamic choreography, this new production will reimagine the original stage version of Copacabana, which was first performed in the US in 1991 and has never before been seen in the UK.

Featuring Manilow hits including Dancin’ Fool, Who Needs to Dream, Welcome to Havana and of course, the Grammy Award-winning Copacabana (At The Copa), this production will have audience members dancing in the aisles. Critics and audience members agree that Copacabana “explodes with memorable songs and dances.”

The story of Copacabana has captivated millions of spectators around the globe. This tale of romance and stardom features aspiring songwriter Tony working as a pianist in a bar when he meets the gorgeous Lola, who is determined to make it in showbiz. Quickly falling for Lola, Tony does everything he can to assist her attempts to find stardom. At Manhattan’s Copacabana Lounge both start to find fame, before fate steps in and Lola is swept away to Havana to work in a splashy night club. But Lola’s new mentor and boss Rico may demand a price for putting her name in lights.

Barry Manilow said today: “I’m honored that Copacabana will return to the UK Stage and send my wishes for success to Jon, Richard, and the entire company.”

Jon Lee (Tony) is best known as a member of pop sensation S Club 7, who for five years dominated the pop world with No 1 hits all over the world including four in the UK. As well as international record sales of well over 13 million, the band had their own television show which ran for four seasons and was shown in 110 countries, and won countless awards including two Brit Awards. Jon’s many theatre credits include Frankie Valli in Jersey Boys (Prince Edward Theatre), Aladdin in Aladdin (Mayflower, Southampton), Marius in Les Misérables (Palace/Queen’s Theatre) and Love Shack (UK tour). Jon also appeared in the Les Misérables 25th Anniversary Concert at The O2.

Richard Grieve (Rico) is best known to television audiences for various roles, most notably as Sam Kratz in Neighbours, Dr. Lachlan Frazer in Home & Away, and most recently as Jonny Foster in Emmerdale. Richard recently appeared on stage in the lead role of Bernadatte in the UK Tour of Priscilla Queen of the Desert, having previously played Mitzi/Tick in the West End production at the Palace Theatre. Other recent credits include Captain Von Trapp in The Sound of Music (Dubai), An Ideal Husband (English Theatre, Frankfurt), A Daughter’s A Daughter with Jenny Seagrove (Theatre Royal Windsor) and Footloose (UK Tour).

Canadian born Jennifer Harding (Lola) is a graduate of George Brown Theatre College, Toronto, and RADA. As a vocalist she has worked with artists including Debbie Gibson, rock group Toto and guitarist Jeff Healey. Theatre credits include Songs from the Playground (Union Theatre) and Boogie Wonderland (Qdos).

Copacabana is based on the song of the same title, which was released in 1978 and earned Barry Manilow a Grammy Award. In 1985, Manilow and his collaborators Bruce Sussman and Jack Feldman expanded the song into a full length, made-for-television musical starring Manilow, writing many additional songs and expanding the plot. The film version was then further expanded into a full-length stage musical that ran at the West End’s Prince of Wales Theatre for two years prior to a lengthy UK Tour. Over 200 productions of the show have since been mounted worldwide.

Copacabana has Music by Barry Manilow, Lyrics by Bruce Sussman and Jack Feldman and Book by Barry Manilow, Jack Feldman and Bruce Sussman. It is Directed by Thom Southerland (Titanic, Southwark Playhouse) with Choreography by Tim Jackson (Merrily We Roll Along, Menier Chocolate Factory/West End), Musical Direction by Lee Freeman, Lighting Design by Tom Boucher and Wig Design by Sam Cox. It is produced by Antony Stuart-Hicks and Paul Leno for Dancing Fool Theatrical Ltd in association with Harlow Playhouse.