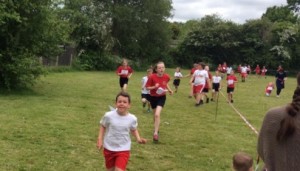 BOYS and girls literally sprinted out of class at the end of term.

The school playground and fields were packed with parents and supporters enjoying the sunshine as their children ran laps of the grounds.

The older children took the long route, while the smallest pupils ran a shorter course, each collecting stamps on their arms for each lap completed.

Stuart Pope, head of school, said: “Children completing five laps are given a certificate, but we always have boys and girls who keep going and going and end up with stamps all up their arms!

“This is a real community event; it’s become a bit of an institution here at Cooks Spinney.”
Children were sponsored for the event, with money raised going to revamping the outside space.

One Response to "Cooks Spinney pupils take on the mini-marathon"