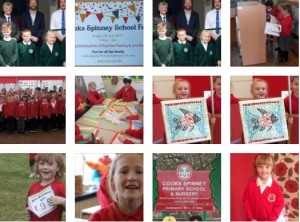 A government publication which aims to raise standards in education will feature a Harlow primary school’s transformation as inspiration.

The Parliamentary Review is produced each year and distributed around the country with the mission of raising standards through showcasing best practice.

It is sent to thousands of leading policy-makers, including MPs, peers at the House of Lords, headteachers, vice chancellors, government agencies, the Department for Education, as well as 200 copies going to all those who feature.
Cooks Spinney Primary Academy has received an invite from the Rt Hon David Curry, chief editor, to represent primary education in the 2017/2018 issue.

The school, once deemed a failing school, is now considered one of the top nine per cent of schools nationally.

Stuart Pope, executive headteacher, said: “This is recognition for the rapid and sustained improvements to our school, as well as the recent Good Ofsted report and for appearing in the top nine per cent of schools nationally for our results. We have also had various education leaders make glowing comments about our journey and all of that information makes its way back to ministers.

“Cooks Spinney has gone from a school which struggled to fill classes and in special measures to now being discussed around parliamentary tables as one of the most improved schools in the country.

“It’s enormous for us to be able to say we are a part of the Parliamentary Review. I am being asked to share strategies and our plans for future improvements to enable all schools in the country to read them. It’s about the change we have seen and the strong leadership which has got us here and sharing that with other leaders so they can make improvements, too.”

Mr Pope said: “My role is more business-like now. Originally, I came in as very much a hands-on deputy headteacher teaching Year 6 full-time. Now, we have staffed the school with really strong people, so my role is more about looking strategically and working with our partners to achieve yet further improvements.

“Education is moving on and it’s now about sharing schools’ experiences to help others.

“I’m really proud for the school to be able to take part in something like this and to be published in the Parliamentary Review for its achievements. It’s another opportunity which comes in while riding the wave of achievement.”

The publication of the 2018 Review, next September, will be marked by an intimate gala evening at the House of Commons where the issues of leadership and team-building will be discussed. This year’s guest speakers included Frank Lampard and Nick Clegg.