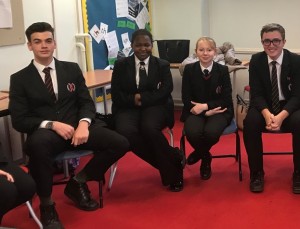 Young people are signing up for a school club – where arguing is encouraged.

BURNT Mill Academy, in Harlow, has relaunched its debate society where students in Year 7 to 11 come together to express their views.

The club is also promoted as a way of keeping up-to-date with current events, to build confidence, to become part of a team and to take part in competitions.

Each week, students practise their debating as well as train to improve their skills.

Maths teacher Angus Hally, who runs the after-school club, said: “Young people are seen as not being engaged with the world around them, particularly when it comes to politics. The debate society gets them to think for themselves and to argue their points and is a great way of getting them involved. They get to explore some of the things they are interested in.

“It also helps to develop an incredibly useful skill which is transferable across their subjects. In English, for example, it helps to make their critical thinking much stronger.

“Most of the time, I throw a topic at them and they have to debate it on the spot. It’s a really exciting club.”

Students are looking to compete in competitions by the Rotary Club and Oxford Schools.