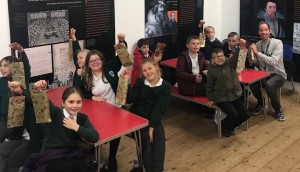 CHILDREN took part in Victorian games as part of their studies.

While there, they played Victorian games such as hunt the thimble, hunt the ring and flip the fish, as well as learning about Victorian feasts and foods before eating a Victorian style meal.

Jennifer Pearce, assistant head, said: “Children investigated the differences in lifestyle between the rich and the poor, focussing on toys, work and games. They made Victorian crafts, such as paper bags and screen-printed cards, which they took home.”

Olivia Armes said: “I had fun learning about the Victorians and seeing the things they had during that time.”

Max Wilson said: “I didn’t know the Victorians started so many of the games we play now and the toys, too.”