A brand-new newspaper has been launched in Harlow…by school children.

PUPILS at Cooks Spinney Primary Academy, in Harlow, have launched the Spinney Star to share news from their school and neighbourhood.

The team of 20 Year 6 pupils are working on both a newspaper and podcast to keep pupils and parents up-to-date.

Working with teacher Gary Cansell, a former journalist from The Sunday Times newspaper, pupils are drawing on his experience to produce their own work. 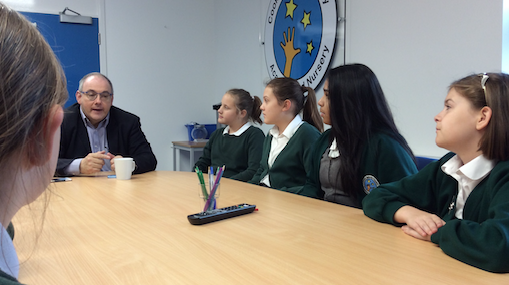 Headteacher Neil Stirrat said: “Our pupils have launched the newspaper and podcast and are running the whole process. They have taken ownership and it has empowered them. They are reporting on what is happening and what is important to them, with their first big feature looking at the potential closure of Mark Hall library. They interviewed Harlow MP Robert Halfon on the issue when he visited the school.

“This is extending pupils’ skills and giving purpose to their writing as they have to think about who their audience is and what they might be interested in reading about. Our confident speakers are working with less confident presenters on the podcast, writing their own scripts and performing them.

“They whole team is having to work to deadlines and use their teamwork and collaboration skills.”

The newspaper and podcast will be published every four weeks and given to pupils, parents and posted on the school’s website.

Mr Cansell said: “Here at school, we have an audience several hundred strong and it’s great to tap into that with Spinney Star. Our team is writing news, features, opinion and review pieces and, along with building on the students’ writing skills, I hope the process sparks in them a greater interest in current affairs.”