By Staff Reporter on February 7, 20194 Comments 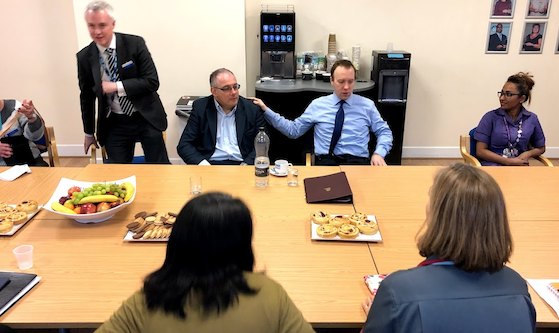 FOLLOWING an encouraging visit from the Health Secretary, Matt Hancock, to the Princess Alexandra Hospital in Harlow on Friday 1st February, Harlow MP, Robert Halfon has secured his fourth debate in the House of Commons on the need for a new hospital in the town.

His speech, which will be delivered at 16.00 on Wednesday 13th February, will focus on NHS funding in Essex and offers the chance to put further pressure on the Government to release capital funding for a new hospital in Harlow.

Throughout his time as MP, Robert has diligently campaigned for a new health campus that would provide both medical and training facilities in one place. He has worked hard to bring in investment into the town, and with the move of Public Health England, the health campus would help make Harlow the science-health capital of England.

The campaign has really taken off, not only with the Health Secretary’s visit, but also with Robert’s questions during Prime Minister’s Questions on Wednesday and to the Treasury, last Tuesday.

In his previous debates, Robert has had support from MPs in neighbouring constituencies in Essex, who also worked together on a joint letter to the former Health Secretary, Jeremy Hunt, in May, last year.