HARLOW Comedy Club returns with its October offering. This month the wonderful talents of John Ryan, Wouter Meijs and Addy Van Der Borgh* bring the laughs! More info on these great acts can be found below. And of course your resident MC Paul Wade returns. 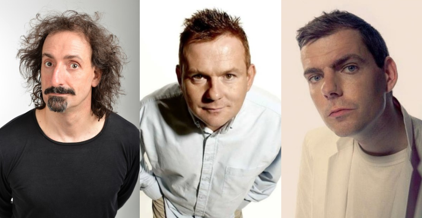 As usual doors open at 7:30pm, with the show beginning at 8pm.

Tickets are available now for £8 from the link above (stbf) or in person from the Rugby Club, or for £10 on the door (subject to availability).

Addy van der Borgh has that rare talent of making people laugh as soon as he walks on stage. He is a great performer of highly acclaimed and original material, an ability noticed immediately by the BBC when he appeared on the ‘Stand-up Show’ on BBC1 after only one year as a comedian. He has subsequently appeared on ‘The World Stands Up’ and ‘Live at the Comedy Store’ for Comedy Central, and the BBC3 series from Baby Cow Productions, ‘Brain Candy’. He has also written and co-presented twenty episodes of ‘TV Meltdown’ for Sky 1 with Kirsty Gallacher (2004 / 2005), has acted in a number of voice-overs for radio and television and has appeared on many radio shows including multiple appearances on the legendary ‘Loose Ends’ on Radio 4.

Addy was the only British comic invited to appear in the Twentieth Century Fox Comedy Showcase in Los Angeles in September 2003 and was subsequently signed to the Hollywood agents Paradigm, and he recently played the starring role of ‘Jack Watson’ in his first film, ‘Little Things’.
Addy studied clowning and physical theatre at LAMDA and with brilliant timing and an array of voices and characters he is well known for his animation of inanimate objects and his wonderful physicality. He has built a following of fans not just in all the major clubs in Britain (The Comedy Store, Banana Cabaret, Up The Creek, The Glee) but also worldwide, including Spain, France, Germany, Holland, Belgium, Croatia, India, Switzerland, Cyprus, Dubai, Bahrain, Muscat, Qatar, Hong Kong, Singapore, Vietnam, Thailand, Shanghai and Australia, as well as entertaining the troops in Afghanistan.

“An excellent stand-up with intelligence and wit” – The Guardian
“Addy’s excellent. His flights of fancy and gentle manner are a brilliant combination” – Time Out
“Brilliant natural clown” – The Daily Telegraph
“van der Borgh has funny bones. This man was born to make people laugh” – Edinburgh Evening News
“An unassuming comic genius” – The Metro
“Spellbinding… perfect timing and physicality” – Chortle
“Brilliant natural clown” – The Daily Telegraph
“van der Borgh can reel off cracking gags and compete with the best freestylers such as Ross Noble” – Evening Standard
“van der Borgh weaves a comedy web that’s as intricate and detailed as it is original” – The List
“There was not a single dip in this consistently funny and inventive show” – The Scotsman
“Addy has a brilliant sense of comic timing” – The Independent
“A revered funny man” – The Times

The irresistibly amiable John Ryan uses his acerbic wit and seemingly encyclopaedic knowledge of the world around him to keep any audience on their toes. His East End Irish upbringing gives him the rare ability to connect with people from diverse backgrounds. John’s reputation for thinking on his feet and confidently and cleverly adapting to any audience has also ensured him many TV warm-ups such as Later with Jools Holland, Strictly Come Dancing, and the National lottery. He also travels all over the world, from performing in Dubai and Bahrain to appearing in high profile shows in the Med and Caribbean. His high energy and warm personality has also helped rocket his health shows into the limelight through ongoing projects with The London Science Museum, Unison, and Plymouth NHS Primary Care Trusts.

Dutch comedian Wouter Meijs arrived in the UK in 2005 after a successful career in the Netherlands and has been very well-received – a huge achievement considering he is performing in his second language! He now performs across the UK, delivering his unique observational style to all kinds of different audiences, and has also been seen performing with his Dutch colleagues at the Edinburgh Festival with the Amsterdam Underground Comedy Collective. In Holland he was a regular at Toomler, Boom Chicago and Comedycafé and opening act for weekly jazz show ‘Hans Teeuwen Zingt’ in nightclub Panama, Amsterdam. He’s quite tall, likes cycling to gigs and his name is pronounced Wow-ter Mice

“Goofy and Excellent” – Bath Chronicle
“Side-splittingly funny, excellent entertainment” – Canarian weekly Tenerife
“Some of the biggest laughs of the night, unique light-hearted observational comedy” – the Sentinel
“Wonderfully twisted” – Spoonfed London
*Line ups can be subject to change due to illness or other unforeseen circumstances.