A PACKED audience at the Harlow Playhouse was treated to four wonderful adaptations of the work of William Shakespeare on Thursday night.

IT takes a lot of courage for Year 4 pupils to get up on the big stage and perform the works of William Shakespeare. On Thursday night the students of Roydon Primary performed with gusto, sparkle and aplomb.

This was such a bright and breezy version of Romeo and Juliet. They all acted with such passion and purpose, filling the stage and not missing a line.

Having said that this was a tragedy and the students made sure you knew this was a sad story.

Well done to all involved. 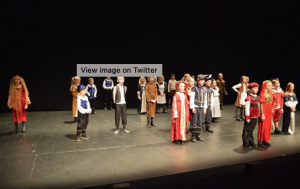 We are incredibly proud as a school of this group of 31 children in Fox Class (Year 4) who took to the stage last night @harlowplayhouse to perform Romeo and Juliet, with passion and confidence, as part of the @SSF_UK What incredible bravery and courage! #roydonprimary #proud pic.twitter.com/kaC02Dlldg

ANY production of Shakespeare that includes Portishead, La Macarena and The Cure has got to be worth a look.

This was really well produced and reminds me that Harlow is lucky to have so many fine Drama teachers.

This reviewer sees plays on this stage all the time and was most impressed with the way these actors used all the space as well as acted to the whole auditorium.

This adaptation kept you involved all the time and had different little pockets all acting in their silos but bringing the whole play together.

Good use of sticks.

The Taming of the Shrew

When you have been reviewing Stewards Academy productions for six years, you know the standard will be high. This version of Taming of the Shrew had real verve and humour. Held together by a very haughty Kate, this production was full of great young actors who brought real character to their roles but whilst they were doing that, they were totally loyal to the work of Shakespeare.

We also think the young lady who sang “Here Comes The Bride” should be hired out for weddings!

LAST but certainly not least. This was dark and intense. This was a mature take on the tragedy of Hamlet and the students performed it with great maturity. Hamlet struck the right balance between ambitious prince and fated royalty.

The dark clothing and sober lighting made for an intense half an hour of the great play. Each actor played a great part in producing a fascinating adaptation.